Renal cysts are sacs of fluid with a thin wall, usually with no symptoms, and have no connection to the renal calyx. Another renal lesion that can be misdiagnosed with cysts is the calyceal diverticulum linked to the renal calyx. The new approach of laparoscopic injection of methylene blue can help the surgeon distinguish renal cysts from a calyceal diverticulum in a patient with no double J (Dj/JJ).
Case presentation
A 52-years patient with a 15 cm lesion underwent laparoscopic surgery of a renal cyst. Surgery was done in the flank position, and the peritoneoscopy was performed after the cyst reveal. Several small cysts were observed at the bottoms of the cyst, so we injected methylene blue to make it clear this lesion was exactly cysts, not calyceal diverticulum. It was proven that there is no leaking of blue color to the renal calyx through the catheter. The cyst was revealed and was removed and sent for pathology.
Conclusions
In our study, the laparoscopic injection of methylene blue indicated no connection with the renal calyx, so the lesion is a renal cyst.  So it can be a new approach for distinguishing cysts from a calyceal diverticulum.

The kidney is one of the most common sites for cyst in the body (prevalence of about 5%). Kidney cysts are sacs of fluid in the kidneys characterized as "simple" cysts with a thin wall (1). They become common as people get old and with no symptoms or harm. Because they often don’t cause symptoms are incidentally found by renal imaging including computed tomography (CT) and ultrasonography (2, 3). The prevalence, number, and size of renal cysts are greater in men compared to women and are connected to age, hypertension, and smoking (4). Most renal cysts (sporadic, acquired, or hereditary) arise from parts of nephrons or collecting ducts, while multicystic dysplasia arises before the formation of nephrons (5).

The treatment strategy is completely dependent on the exact diagnosis of cysts or calyceal diverticula, and it is critical to discriminate cysts from calyceal diverticula. In some patients, placing a Double J stent is impossible because of the patient's skeletal situation or because the surgery duration is shorter. In the current study, we use laparoscopic methylene blue in cysts to ensure there is no contact with the pyelocaliceal system.

A 52-year woman was referred to Sina hospital complaining about vague right flank pain and heavy feeling. Her diagnosis was a large flank cyst. She had no family examination, no history of surgery, and no other illness. Abdominal and pelvic computed tomography with and without contrast and simple culture indicated the 15 cm cyst.

We selected this case, and all steps of our study completely adhered to CARE guidelines.  She was the candidate for surgery but there was no certain diagnosis between renal cysts and calyceal diverticulum. In the flank position and through the open access the trocar 15 was embedded. Then peritoneoscopy was performed, and 2 trocars and 5 were implanted. The colon with strong adhesion was fully medialized. Now the cyst was exposed (Figure 1). The needle was inserted through the skin into the large cyst and sterile methylene blue was injected (Figure 2). The cyst was complete with blue color. The catheter was checked to see whether the blue color enters the urine stream or not (Figure 3). Fortunately, it was completely clear, and its roof was unroofed. At the bottoms of the cyst, several small cysts were observed, so we injected methylene blue, as mentioned above, and check for urine color after approval that the lesions were cysts, the cyst wall was removed. After six weeks and six months, the patient reported the satisfying result of surgery with no vague right flank pain or cyst recurring in follow-up sonography. 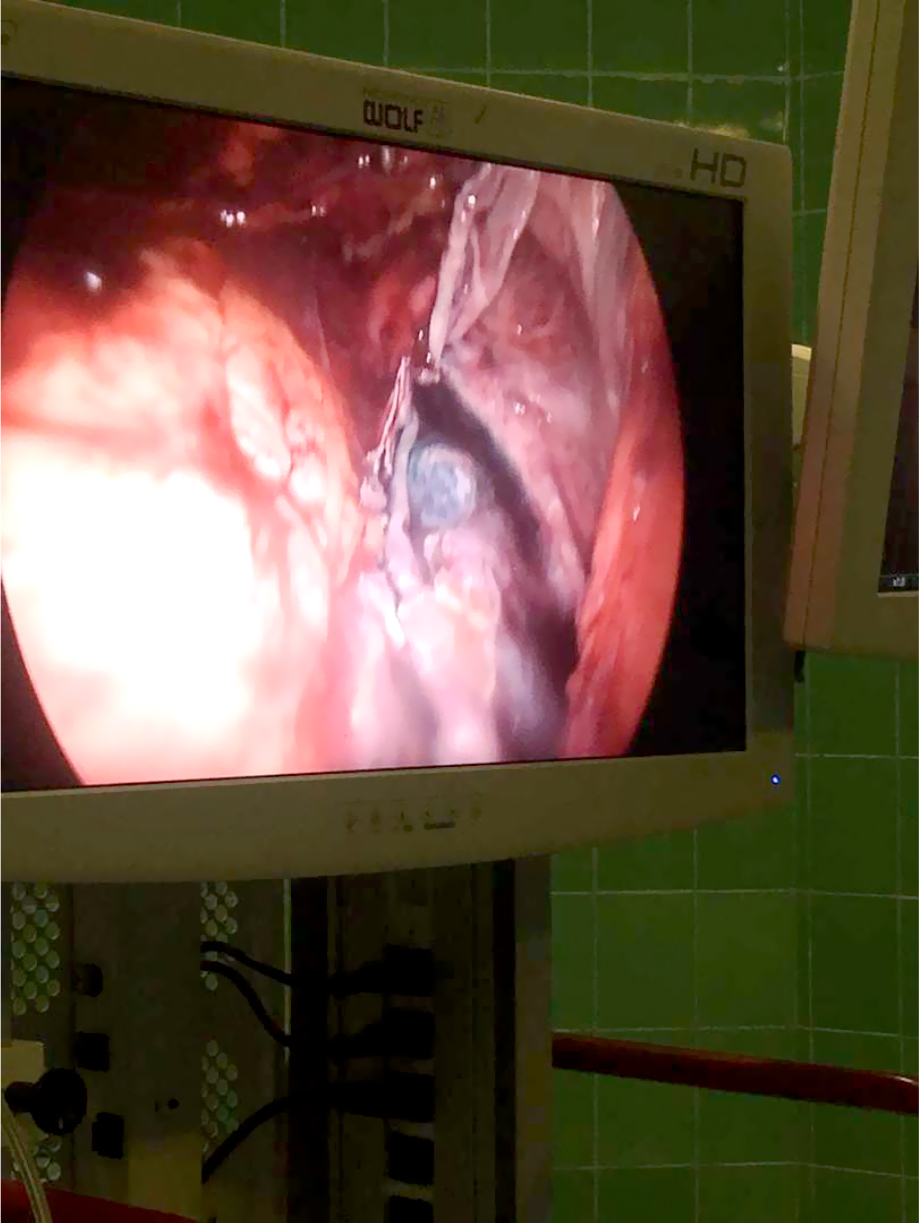 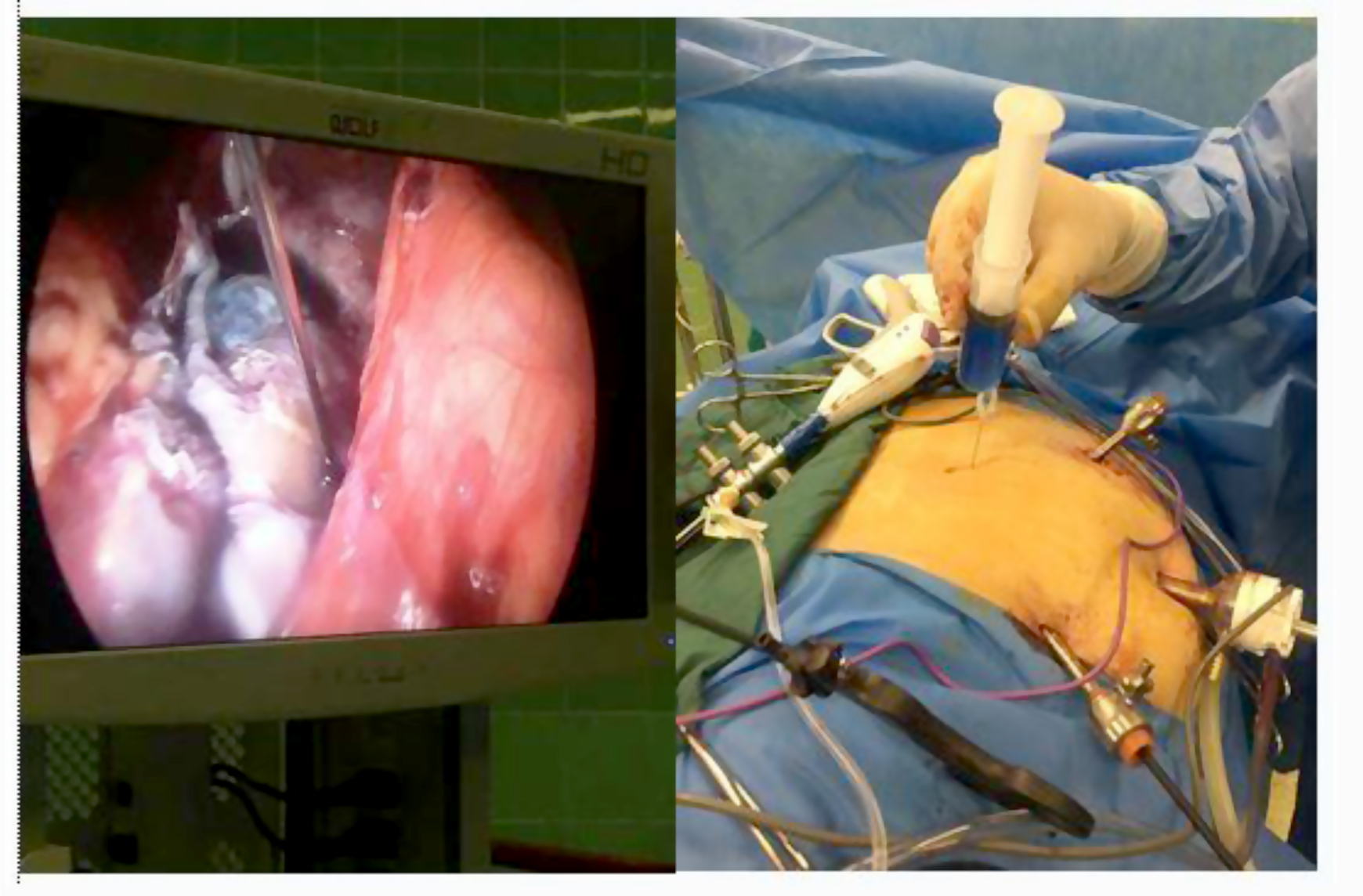 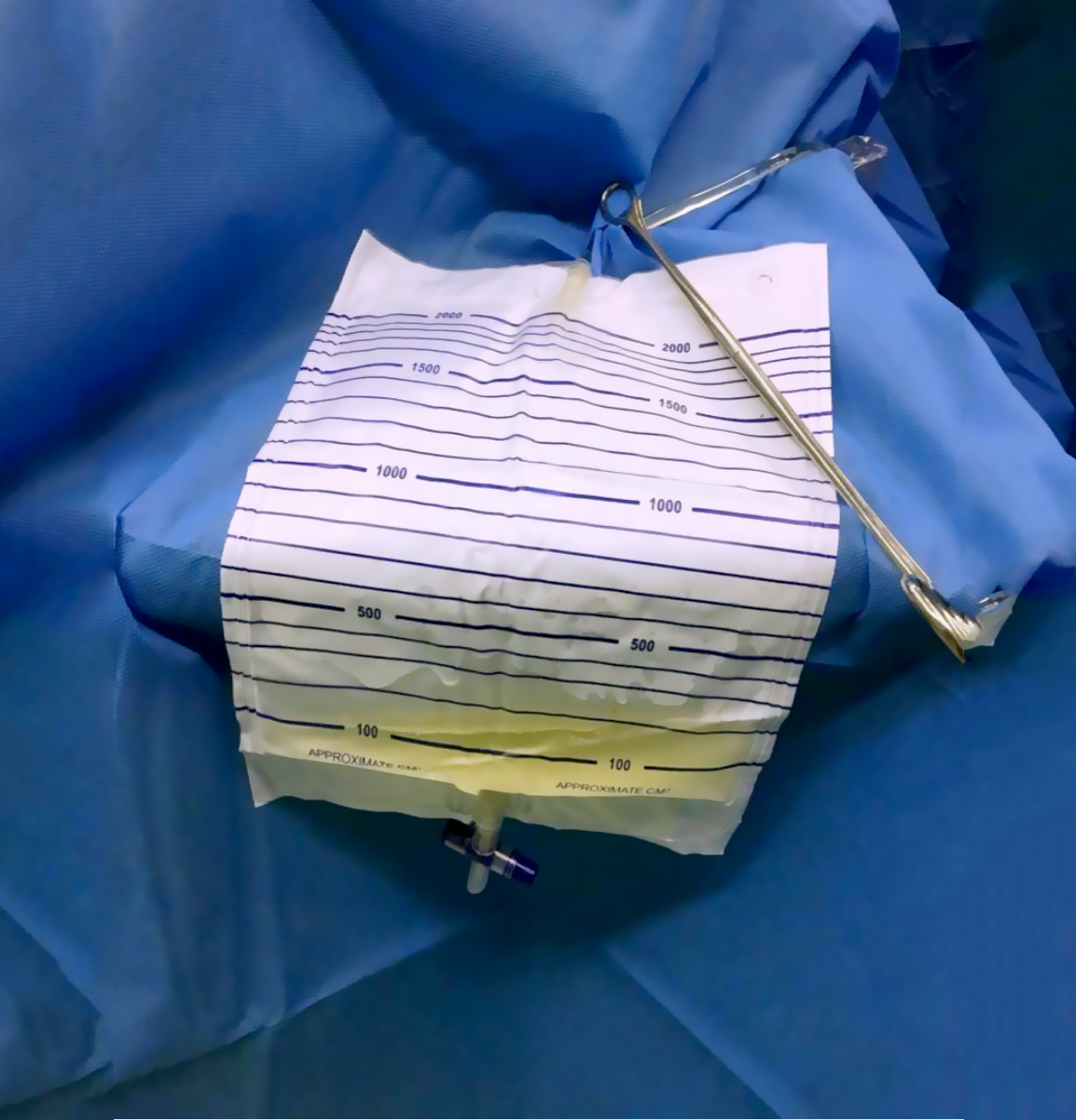 The exact diagnosis between renal cysts and calyceal diverticulum is problematic. In the current study, we use a new approach for antegrade detection by using methylene blue color. In fact, for renal cystic treatment, percutaneous aspiration, with or without sclerotherapy, can be the lucrative minimally invasive option with very high recurrence rates (up to 90%) (7, 8).

The calyceal diverticulum mimics solitary or multiple fluid-filled spaces within one or both kidneys (9, 10). They are mostly placed in the upper pole of the kidney in connection with the minor calyx, so their treatment strategy is different from renal cysts. Surgical ablation of calyceal diverticula by percutaneous endoscopy, laparoscopy, and ureteroscopy has fundamentally taken the place of both extracorporeal shock wave lithotripsy (ESWL) and open surgical fulguration in almost all cases of diverticular cavities (11).  In our case, it was important to know whether it was calyceal diverticula or Pyelogenic Cysts. The typical renal cyst looks transparent and is black and blue in some areas, so injecting methylene blue into the cyst can aid the surgeon to identify the cyst wall more accurately (12).  Methylene blue is a fluorophore and a heterocyclic aromatic compound with a diameter of 1.43 nm, 320Da, with an excitation peak of 670 nm and an emission peak of 690 nm (13). It was reported by Roberts and his colleagues that for parenchymal cysts, the methylene blue injection through the ureteral catheter could make it clear there is no communication with the collecting system (14).  In 2018, Wang and his colleagues represented a modified method for easily locating cystic walls by methylene blue Injection via percutaneous penal cyst puncture in the flexible ureteroscope (15). In our study, the needle was inserted through the skin into the small cysts, and methylene blue injection indicated no connection with the renal calyx, so the lesion is a renal cyst.

In some patients, placing a Double J stent is impossible because of the patient's skeletal situation or because of the surgery duration is shorter. Also, Double J has its complication and difficulties. Laparoscopic injection of methylene blue can be a new approach for distinguishing a cyst from a calyceal diverticulum in such cases.

SMKA was the principal surgeon who suggested this novel method, HRZ was the surgeon, and FKH wrote the manuscript.

All authors claim no competing interest in this surgery case report.