Introduction
There are reports that a variety of foreign bodies were inserted into urogenital tracts and urologists have been facing this issue for many years. Foreign bodies in the bladder may be attributed to self-infliction, iatrogenic issues, or migration from other adjacent organs. In children, curiosity and playfulness may be the primary motives for inserting objects into the urethra.
Case Presentations
Here, a case report of a 19-year-old boy who inserted a wire (telephone cable) into his bladder is presented. Under general anesthesia, the cystoscopy was performed and using grasper the cable was removed from the bladder of the patient. He was discharged a day after with just a few irritative symptoms. At the time of discharge, the patient’s parents were advised for psychiatric consultation.
Conclusions
The foreign body of the bladder in patients can happen in a patient with a mental health disorder. To diagnose through pelvic radiograph plays a crucial role in the diagnosis of the disease.

The Subject of urogenital tracts foreign bodies due to its high frequency has been of interest to urologists, thereby, urologists must be aware of how to treat patients with foreign bodies (1). Following prior studies, a variety of objects as a foreign body of urogenital tracts, which can be inserted into these tracts or attach to them, has been reported (2,3). The main cause behind inserting objects into urogenital tracts is sexual desires (3) and in adults, it mostly occurs when adults, who most often suffer from mental health disorders, try to masturbate with objects. Herein, we describe a case that inserted the whole of a phone cable into his bladder through the urethra (4).

A 19-year-old boy was referred to our hospital with complaints of dysuria, nocturia, and suprapubic pain for approximately three weeks. He agreed to report his case by signing the informed consent and the case report is based on case reporting (CARE) guidelines. He has been under treatment with a diagnosis of multiple sclerosis for almost two years. He also mentioned that these symptoms have been worsened in the last two weeks. Tenderness in the supra-pubic region was the only sign that was detected in clinical examination. In addition to pus, red blood cells were detected in urine analysis and the result of urine culture was negative. An abdominal X-ray was performed for the patient and a cable was seen in the imaging (Figure1). The patient was admitted and taken to the operation room. Under general anesthesia, the cystoscopy was performed and using grasper the cable was removed from the bladder of the patient. He was discharged a day after with just a few irritative symptoms. At the time of discharge, the patient’s parents were advised to get the case for psychiatric consultation. 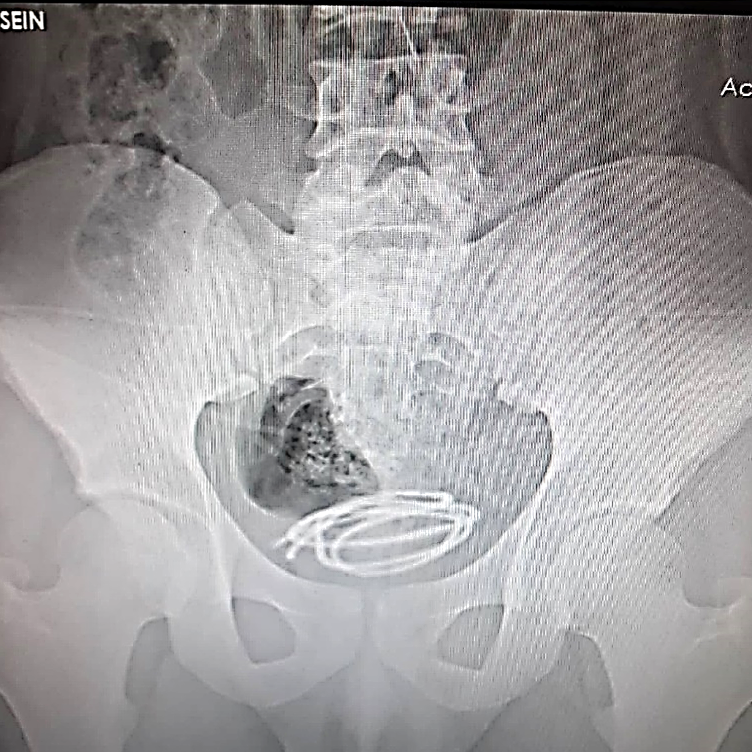 Dealing with foreign bodies of urogenital tracts has been challenging for urologists and urologist’s experiences showed that most cases require interventions. In concern of choosing the best method of removing foreign bodies, the primary factors that should be focused on are the size and mobility of the object (1,5). In addition to those, the type of foreign body and foreign body location plays a pivotal role in choosing the best method of intervention. The methods that have been applied so far are including meatotomy, cystoscopy, internal urethrotomy, external urethrotomy, suprapubic cystotomy, Fogarty catheterization, and solvents injection. Evidence is in support of the endoscopic method as the gold standard of object removing (1), especially in cases with foreign bodies above the urogenital diaphragm (6).

Patients with foreign bodies in urogenital tracts usually present themselves with symptoms such as dysuria, nocturia, hematuria, urinary frequency, partial or complete urinary retention, and difficult voiding (7). The initiation of symptoms after foreign body insertion varies from several hours to several months (8,9) and oddly, this time for an Egyptian man was about seven years following Abdulla's report (10). Unfortunately, a great proportion of patients with urogenital foreign bodies do not come to hospitals other than they become symptomatic (6). Foreign bodies may result in severe complications including urethritis, hemorrhage, urethral diverticula, periurethral abscess, and periurethral fistula, and owing to these, immediate treatment necessitates (11) Apart from surgical interventions, because of underlying mental disorders in the majority of cases, psychiatric assessments should be performed for patients (12).

Clinical history along with radiologic examination is the main tool for the diagnosis of urogenital tracts foreign bodies. Radio-opaque objects can be readily diagnosed with pelvic X-ray, but if the object is radiolucent, the better radiological diagnostic method is retrograde cystography. The obvious benefit of ultra-sonography in objects of urogenital tracts is clarifying the precise location of objects (13,14). In our case, the phone cable was easily seen on a plain abdominal X-ray and further imaging was not essential.

Foreign bodies are capable of reaching the urinary bladder in three ways: 1. accidentally 2. Intentionally insert into the urethra 3. Migration from adjacent organs (15). When a patient inserts a cable into his/her bladder, at first, part of the cable remains in the urethra. However, the urethral part gradually moves into the bladder, which occurs during micturition, until the whole part of the cable presents in the bladder (12).

A man with a history of inserting a telephone wire into his urethra was described. He presented with urethral bleeding, pain in the urethra, and suprapubic. He did that because of erectile dysfunction following a myocardial infarction, which was happened 4 years before the heart attack (5). The manifestation of our case was somehow similar to the mentioned case but, in our case, in contrast to the above case, the patient inserted a phone cable into his bladder unintentionally.

All authors had an equal contribution.

All authors declare that there is not any kind of conflict of interest.

All authors ensured our manuscript reporting adheres to CARE guidelines for reporting of case reports. The patient agreed to report the case by signing the informed consent.