Introduction: Retrograde Intrarenal Surgery (RIRS) and Minimally invasive PCNL (also termed mini-PCNL or mini-Perc or mPCNL) mini-perch surgery are two methods of residual stone treatment. We aim to compare the results of mini-perch and RIRS to treat residual stones after PCNL with Hounsfield unit over 1000. In this retrospective cohort study patients with residual stones after PCNL with Hounsfield unit above 1000 or a stone-to-skin distance greater than 10 cm divided into two groups of mini perch or RIRS.
Methods: Total number of 32 patients in the RIRS group (mean age 38.68±8.00) and 35 patients in the mini-perc group (mean age 42.05±13.22) were studied. The hemoglobin loss (p-value=0.01), need for blood transfusion (p-value=0.04), hospital stay (p-value=0.006) and surgery time (p-value=0.001) were significantly lower in RIRS group.
Results: Although the percentage of success (p-value=0.17) and Stone Free Rate (SFR) (p-value=0.401) were higher in the mini-perc group, it was not significantly different from RIRS. Complications in the mini-perc group were significantly higher than in the RIRS group (p-value=0.05).
Conclusions: The RIRS method has no significant difference in comparison with mini-perc. RIRS have lower operation time, shorter hospitalization, and less complication. 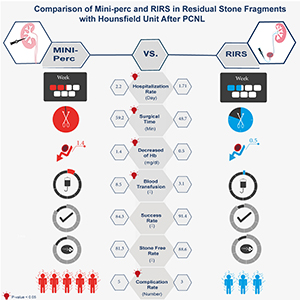 Urolithiasis is the second most common disease of the genitourinary tract. Today, several surgical procedures are used to treat these, each with its advantages and disadvantages. The success of surgery depends on several factors, including the size of the stone, the duration of the operation, and the length of stay in the hospital (1). Recent studies have shown the role of Hounsfield unit CT scans in the treatment of kidney stones (2).

Retrograde Intrarenal Surgery (RIRS), performed by flexible ureterorenoscopy, is one of the new methods used to treat urinary stones, which can be used especially in stones smaller than 15 to 20 mm (3). This method is less invasive than other treatments which have fewer side effects and shorter hospital stays, so the indications for using this method have become widespread (4, 5). The success rate of this method has been reported in previous studies of 60 to 90%  (6). Minimally invasive PCNL (also termed mini-PCNL or mini-Perc or mPCNL) is less invasive than percutaneous nephrolithotomy (PCNL) which is now used as an alternative to PCNL, especially in cases of stones larger than 2 cm, diverticular caliceal stones, and large lower-pole stones (7).

In the treatment of residual stones, several methods have been proposed, including sandwich therapy, in which two surgical procedures are performed at a distance from each other, but few studies have been conducted on their success rate and complications (8). This study aimed to compare the results of mini perch and RIRS to treat residual stones after PCNL with above 1000 Hounsfield units.

The study was conducted as a retrospective cohort with the permission of the Ethics Committee of Tehran University of Medical Sciences (IR.TUMS.VCR.REC.1398.835) and the Iranian Registry of Clinical Trials (IRCT20190624043991N5). Patients entered after signing the consent form and after PCNL had a residual stone with above 1000 Hounsfield unit or stone distance to skin more than 10 cm. Kidney abnormalities, including horseshoe, pelvic and mal-rotated kidneys, and patients under 18 years of age were excluded.

Patients were randomly candidates to mini-perch or RIRS. RIRS was performed according to the method reported in the study of Kazem Aghamir et al., in 2018 (9) In this study, patient's demographic information, body mass index (BMI), stone-to-skin distance (cm), location, size (cm), decreased hemoglobin (g/dl), need for blood transfusion, hospital stay (day), surgical time (minute), successful rate, stone-free rate and complication based on Calvin classification (10) were recorded from patients' electronic profiles (Table 1). The number of patients with residual stone below 3mm was considered a successful rate and the absence of residual stone was considered a stone-free rate.

Data were analyzed with SPSS software. Qualitative analysis was reported in prevalence and percentage. Quantitative analysis was reported based on mean ± standard deviation (SD). Comparisons between different groups in terms of classification variables were performed using the Chi-square test. In case of correction, Fisher Exact test was used. For data with normal distribution, a comparison between groups with different factors was performed using an independent t-test. For non-parametric distribution variables, comparisons between groups were performed using the Mann-Whitney test. A significant level was considered less than 0.05.

Table 3. The complication in RIRS and mini-perc (*MW: mean weight)

In this study, we compared mini-perc and RIRS methods in the treatment of stones residual over from PCNL with above 1000 Hounsfield units. As far as we know, there is no specific study to compare these two method's surgery in materials that have been contraindicated or impossible to perform Extracorporeal shock wave lithotripsy (ESWL) in the remaining stones after the previous PCNL. We showed for the first time that although the percentage of success and the stone-free rate were higher in the mini-perc group, it did not differ significantly from RIRS.

PCNL is a surgical procedure used for large or complex kidney stones (11). In a study by Ramman et al., 8% of patients with PCNL had residual stones and 61% of them needed reoperation. In this study, similar to our study, the highest location of the remaining stones was in the lower lobe (12).

In Resorlu et al., study, the success rate of mini-perc and RIRS was 85.7% and 84.2%, respectively. In this study, researchers examined stones with 1 to 3 cm diameter. In our study, the range of stones studied was 1 to 3 cm, except that these stones were remnants of the previous PCNL surgery. Our success rate in mini-perc and RIRS was 91.42% and 84.37%, respectively. Our higher success rate in this study was probably due to the effect of the previous surgery on the remaining stones and making them more vulnerable. Also, in this study, the complication was reported based on Clavien classification, as in our study. The complications that were observed in mini-perc and RIRS surgeries were 17% and 8.4%, respectively, which was similar to the results of our study (13).

In review studies, comparing the interventional methods of treating kidney stones, Ramón de Fata et al., showed that the RIRS surgical procedure took longer, while in our study the RIRS time was shorter than the mini-perc. This difference could be due to the skill of the surgeons. However, the results of hospitalization were similar in the two studies (14). In another study in South Korea, that examined RIRS and mini-perc interventions in stones larger than 10 mm, the success rate in mini-perc and RIRS was 85.7% and 97%, respectively, that contrary to our results. In this study, hemoglobin reduction and hospital stay time were similar, while in our study they were lower in the RIRS group (15). This difference may follow ethnicity, which is shown to be effective in outcomes of urolithiasis surgery (16).

According to the results, in cases with residual stones in PCNL that have more than 1000 Hounsfield units, the success and stone-free rate of RIRS did not differ significantly from mini-perc and also the time of operation and duration of hospitalization and the need for blood transfusion and reduction of hemoglobin and complication lower in a patient with RIRS. It is recommended to choose the treatment method in each center according to the surgeon's facilities and skills.

There is attendant morbidity associated with ureteral stenting, which is a limitation of RIRS. Limitations of this study include its retrospective nature and that there was the risk of selection bias. The main disadvantage of RIRS is the need for general anesthesia and PCNL has the advantages of having a high rate of stone clearance and being cost-effective.

SMKA had the main idea for this research and conceived the study. MRJS was involved in protocol development, gaining ethical approval, patient recruitment, and data analysis. BF, MGHM wrote the first draft of the manuscript. All authors reviewed and edited the manuscript and approved the final version of the manuscript.

We would like to thank the Tehran University of Medical Sciences.

All authors declare that there is no conflict of interest.

There is no funding to report.

All data and information will be provided on request.