Introduction: Stenting in the ureter following RIRS (Retrograde Intrarenal Surgery) and stone removal is recommended to prevent edema and colic pain. This study aims to find the optimal time for ureteral stent removal after RIRS with fewer complications.
Methods: This study was run under Tehran University of Medical Sciences Ethical Committee (IR.TUMS.VCR.REC.1398.750). In this retrospective study, demographic and clinical information of patients from 2013 to 2019 were investigated.  The patients were classified based on the duration of ureteral catheter placement: group A less than 24h, group B 24-72h and group C Removed after 72h.
Results:  From our 80 patients who met inclusion criteria in A and B groups, urologists had to insert a DJ stent for 16 of 19 (84%) (Due to pain and hydronephrosis) and 9 of 27 patients (33%), respectively. In group C, however; only 5 (15%) in 33 patients required DJ stent following the removal of the simple ureteral catheter. Hence, 84% of the patients with a simple ureteral catheter for over 72h in their ureter did not need re-stenting (P-value < 0.001).
Conclusions: We concluded that the optimal time of stenting for a simple ureteral catheter is 72 hours. Catheter removal after this time would lead to the least complications. 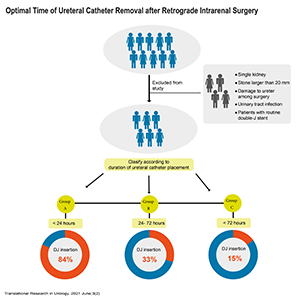 The prevalence of kidney stones is estimated at approximately 7%-10% in the world’s population (1-3). Almost 50% of symptomatic stones need surgical intervention. There are different methods of surgery, including extracorporeal shock wave lithotripsy (ESWL), retrograde intrarenal surgery (RIRS) for treating kidney stones, and Percutaneous nephrolithotomy (PCNL) (4). Holmium laser device ureteroscopy is usually used in this method. Stones are broken down into smaller pieces to pass the urinary tract.

RIRS is an advanced lithotripsy technique with a flexible ureteroscope. Recent advances in holmium laser technology, application of new generations of flexible ureteroscopes, and promotion in urologists’ skills have caused RIRS to replace alternative methods (5, 6). In order to minimize RIRS-associated morbidities and according to EAU (European Association of Urology) guideline(10), RIRS and ESWL are introduced as frontline methods of choice for kidney stones less than 2cm. RIRS was raised as the first treatment method of choice when ESWL fails, especially in cases of renal and urinary structure abnormalities, obese patients, and bleeding diathesis (7-9).

Most urologists insert a stent in the ureter during RIRS following stone removal to prevent edema and colic pain in the ureter (10). Stenting also helps smaller stone pieces to travel through the urinary tract and pass from the body more easily (11). The purpose of postoperative stenting is to prevent hydronephrosis, pain, and ureteral stricture and to facilitate the healing process and the passage of the stone fragments. Postoperative stenting is necessary in cases of mucosal edema and hemorrhage, epithelium injury, ureter perforation, and solitary kidney (10, 12, 13).

However, some studies showed that if the ureter is not damaged during the procedure, stenting will not be necessary and only increase costs and bladder irritant symptoms. These studies indicate that in case of ureter damage, DJ (double-J) stent should remain in the urinary tract for 3-6 weeks; otherwise, the stent can be removed 3-10 days postoperatively.

In order to reduce complications associated with DJ stenting and avoiding further operation room costs for removing DJ stent (12), the simple ureteral catheter can be used for most patients. There is disagreement over the exact duration required for keeping a simple ureteral catheter in the ureter following RIRS. The aim of this study is to find the optimal time for ureteral stent removal after RIRS with fewer complications.

In this retrospective study, demographic and clinical information of patients were referred to Sina, Kasra, and Yas hospitals from 2013 to 2019, and 80 of the total 350 files were collected and entered the study. The study was confirmed by Tehran University of Medical Sciences Ethical Committee (IR.TUMS.VCR.REC.1398.750).  Demographic information including age, sex, right/left operated kidney, stone size, and duration of ureteral catheter placement in the ureter was extracted from the documents. Exclusion criteria included single kidney, stone larger than 20 mm, damage to ureter among surgery (RIRS), urinary tract infection, or patients with routine double-J stent placement after ureterorenoscopy which included 270 patient records. All procedures were performed by a single urologist.  Written informed consent was obtained from all the patients.

Regarding the procedure, Prophylactic antibiotics were administrated to all patients. Patients were placed in the lithotomy position under spinal anesthesia. After retrograde pyelography under fluoroscopic guidance, a 0.035-inch guidewire was placed in the upper tract. Ureter stones were treated by 8.0/9.8 French Ureteroscope (Karl Storz). Large stones were fragmented with holmium laser and the fragments were removed by the stone basket or grasper. After the ureteral stone was completely removed, a 12/14 F ureteral access sheath was placed. The flexible Ureteroscope (7.5Fr Karl Storz Flex-X) was inserted into the renal pelvis. All stones were fragmented with holmium laser and large fragments were removed by the stone basket. At the end of the procedure, the entire pelvis and calices were inspected for the residual stones under fluoroscopic guidance and a ureteral catheter (5-Fr, 70 cm) was remained instead of a DJ stent.

Then, the patients were classified into the following three groups considering the duration of simple ureteral catheter placement in their ureter:

Note that leaving ureteral catheter less than 72 hours in groups A and B was not programmed action and their ureteral catheter was removed spontaneously and accidentally. And the data were investigated retrospectively.

Statistical analysis was done using SPSS 18.0® for Windows®. Variables were shown by mean ±SD and compared with a t-test.  P-value < 0.05 was considered significant.

Among 20 patients of group A, 10 patients had stones in their right kidney and 10 in their left. In group B, stones were found in the right and left kidneys of 11 and 16 patients, respectively. In group C, 20 patients had left kidney stones and 13 had stones in the other kidney. With reference to the data analysis, there was no significant association between kidney side and length of simple ureteral catheter maintenance in the ureter (P-value=0.732).

The mean stone burden in groups A, B, and C was 16, 15, and 16mm, correspondingly and analysis of the data showed no significant relationship between stone burden and duration of simple ureteral catheter use in the ureter (P-value= 0.689).

Considering the evidence obtained from patient files with simple ureteral catheter insertion following RIRS, we found that the most appropriate time for preserving a simple ureteral catheter is 72 hours. Following technological advances and making delicate ureteroscopes as well as promotion of urologists’ experiences, RIRS can be conducted by skillful urologists with no complications in most cases and there is no need for long-term DJ catheter placement in the ureter.

The presence of the stent DJ as a foreign object is the common cause of patients’ postoperative discomfort, though DJ is not associated with Bladder irritation symptoms and severe hematuria. However, it has more severe complications like catheter migration and fragmentation, urosepsis, ureteral perforation, visceral ureteral fistula, and calcium deposition on catheters with different rates reported in various studies. For instance, correspondingly 15% and 75% of the patients develop above complications 3-4 weeks and 3 months postoperatively. Moreover, removing the DJ catheter would impose further operation room costs (12, 14-16). In case, catheter removal is carried out on an outpatient basis, this cost would be omitted. Many studies have pointed out that over 50% of patients for whom postoperative stenting is used developed complications like irritative voiding symptoms, groin pain, hematuria, stent migration, infection, and pyelonephritis (10).

Peter et al., showed that patients who had external ureter catheter insertion had a better quality of life in patients undergoing URS (ureteroscopic retrograde surgery). In this clinical trial, 141 patients were divided into two groups. In one group, a short-term ureter catheter was inserted for 6 h following URS and the second group had a DJ stent embedded in them, and they were removed within five days. They showed that a short-term ureter catheter is a safe procedure and superior to a DJ stent with regard to urinary symptoms, pain, quality of life, and stent-related Symptoms (12). Although their ureteral catheter time was much less than 72 hours, they reported no complications.

Although this study was one of the first attempts to find the optimal time of ureteral catheter maintenance after RIRS, there were some limitations. The first one is the retrospective nature of this study. As the removal of these catheters was accidental and spontaneous, randomization could not be performed. Secondly, the sample size of this story is not adequate for making strong recommendations.   Determining the best time of simple ureteral catheter preservation in the ureter requires further randomized double-blind clinical trials with larger sample sizes.

VAY had the main idea for this research and conceived the study. MFY and MS were involved in protocol development, gaining ethical approval, patient recruitment, and data analysis.

The study was run under Tehran University of Medical Sciences Ethical Committee (IR.TUMS.VCR.REC.1398.750).