Introduction: To assess the therapeutic efficacy of potassium citrate in the nonsurgical management of renal stones we run this research. The prophylactic effects of Potassium Citrate over renal stone formation have been established but there is still a gap in its therapeutic effect.
Methods: A written informed consent was given to the patients who fulfilled the inclusion criteria and were interested in participation. Eventually 56 patients (Mean age= 43.7 ± 10.8) from June 2018 to December 2018 with a total of 86 renal stones enrolled in the study and treated with potassium citrate (10 mEq Alithoral, Nooria Darman Pasargad, tablets, three times a day). Moreover, the patients were recommended to reduce sodium intake as well as oxalate-rich foods, have at least 2 liters of water per day and normalize calcium intake. Finally, they were assessed 8 weeks after the treatment initiation, while in those whose stones remained, the assessments were repeated for another 8 weeks.
Results: Based on our findings, 42 and 25 stones were completely dissolved at the first and second visit, respectively. Compared to the baseline parameters, the mean size of stones in the largest diameter decreased significantly from 5.13 to 1.96 mm and 5.13 to 0.79 mm (p-value<0.001) at the first and second visit, respectively.
Conclusion: Potassium citrate plays a crucial role in pulverizing and also reduction of the dimensions of the renal stone. Therefore, apart from the prevention of renal stones recurrence, potassium citrate can be used in favor of treating renal stones. 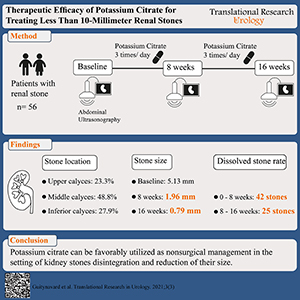 A large number of people have experienced kidney stones around the world. The lifetime risk of urolithiasis in individuals varies from 10-15% in developed countries to 20-25% in the Middle East (1). Furthermore, there is a 50% risk of kidney stone reformation within 5-10 years among those experiencing the first episode of renal calculi without applying any medical treatment (2). Consequently, due to the recurrent and unpredictable nature of urinary system stones and their notable prevalence, a great burden has been imposed on the healthcare system and society (3).

Currently, regarding the management of renal stones, open surgery has been less utilized owing to better alternatives, especially extracorporeal shockwave lithotripsy (ESWL), which has revolutionized the treatment of renal stones; however, it may have some complications such as persistent residual stone fragments, infection, and kidney injury which restrict its broad application (4-7). Thus, less attention has been paid to medical therapeutic strategies in these patients, although they are used when there is no favorable response to dietary modifications (8-10).

Based on the results of some studies Potassium Citrate (PC) plays a remarkable role in lessening the odds of renal calculi recurrence through various mechanisms (11-15). Nevertheless, still few studies have been conducted concerning the treatment of renal stones with PC; although, the feasibility of PC administration as an approach for the resolution of urolithiasis should be clarified (8). Therefore, the present study sought to evaluate the therapeutic efficacy of PC in the treatment of patients with kidney stones.

Those patients diagnosed with kidney stones below 1cm from 2018 to December 2018 at the Urology Department of Sina hospital participated in the study. The protocol of the study was approved by the Iranian Registry of Clinical Trials (IRCT20190624043991N6). Patients were recruited for the study after signing the written informed consent.   The exclusion criteria were poor control diabetes, chronic diarrhea, history of digoxin consumption, history of hyperkalemia (potassium>5meq/L), levodopa intake, glomerular filtration rate under 70 ml/min, pregnancy, history of previous renal stones, multiple renal stones, renal transplantation, solitary kidney, cysteine stone, and stones greater than or equal to 1cm. The procedure was described for the patients in detail, and only the patients who signed the written informed consent were considered for participation.

Among the patients, 20 (35%) had two and 36 (65%) had only one kidney stone. The patients’ age and gender, size, location of the stone, and post-treatment outcome (the stone size) were gathered. The characteristics of renal stones were obtained by ultrasonography or computed tomography scan. A blood sample was drawn for creatinine and glucose level; also, urinary tract infection was ruled out by urine culture for all of the patients. The calculi were divided into upper, middle, and lower calyces stones. Potassium citrate (Alithoral 10, Nooria Darman Pasargad) was administered to all of the subjects three times a day for eight weeks. The same therapeutic technique was repeated for eight more weeks for the patients with undissolved stones. Furthermore, all of the patients were recommended to lessen their sodium and oxalate-rich foods intake, drink at least two liters of water every day and normalize the consumption of calcium. Meanwhile, serum electrolytes and urine pH were measured every 4 weeks. If the urinary pH was greater than 7.2, the agent's dosage is reduced to 20 mEq/day and if it was lower than 6.8, 40 mEq/day is administered. Further, all of the patients were examined in the outpatient setting after 8 weeks from nephrolithiasis diagnosis. To this aim, a precise history was taken from each patient regarding new stone formation signs and symptoms, and abdominal ultrasonography was used to assess the effect of citrate potassium on stone dissolution. All of the sonographies were performed by an expert radiologist at our institution. Finally, the patients whose stones were not dissolved after 8 weeks, were examined with the same protocol.

Taking into account the stone location, the size of middle and lower calyces stones decreased significantly, while no remarkable reduction has occurred in the magnitude of upper calyces stones (p-value= 0.261). Also, no meaningful change was observed in the location of the stones after 16 weeks compared to the baseline value (p-value>0.05).

The present study focused on the potential applicability of citrate potassium in dissolving renal stones (<1cm), irrespective of their composition. The results indicated that a high proportion of patients with below 1cm kidney calculi got stone-free during two months of follow-up when citrate potassium was applied. Furthermore, none of the patients showed evidence of stone reformation, which is considered a proven fact compared to the results of the previous studies (11, 12, 16, 17).

Some studies indicated the role of selective long-term treatments in preventing calcium stone recurrence. Based on the results, there is an approximate 39% risk of nephrolithiasis recurrence. However, among the patients who received medical treatment, the odds of the need for surgical intervention are scarce (22-25). Mattle et al., reviewed the importance of alkali citrate in preventing renal stones recurrence, suggesting the rate of stone formation decreased significantly ranging from 47 to 100% among 21 uncontrolled studies with a population of about 1000 patients (26).

Low levels of citrate in urine have been recognized as one of the major risk factors in the formation of kidney calculi. Besides, the administration of citrate preparations can have beneficial effects in minimizing the risk of recurrence among patients with hypocitraturia (22, 27). Among different forms of introduced citrate preparations so far, citrate potassium is considered the most tolerable and effective one (28, 29). Citrate preparations can induce some changes leading to the reduction of the stone formation including an increase in the urinary citrate levels through providing alkali load, modification of the potassium level to prevent hypokalemia, and an increase in the urine pH, which can positively affect uric acid and cysteine stones (30). Additionally, citrate potassium can be used for inhibiting the formation of struvite stones (31).

It is noteworthy that no major side effect has been reported for alkali citrate treatment and the minor ones are mainly related to the gastrointestinal system. The most reported side effects were eructation/bloating/gaseousness (26%) or diarrhea (12%) (26). The liquid form of potassium citrate compared to its tablets was accompanied by higher rates of complications (33% vs 9.3%) (37). Despite a low rate of complications in tablet form, due to its ineffectiveness in patients with chronic diarrheal syndromes, administration of this type of delivery is limited (38). In the present study, the tablet form of citrate potassium (Alitoral) was used, and few patients reported gastrointestinal adverse effects, which were resolved after providing dietary recommendations.

In patients who are treated with citrate potassium, due to electrolyte imbalances and urinary pH disturbances, routine follow-up with blood and urine tests is necessary. An increase in urine pH may predispose the patient to the formation of calcium phosphate stones. This type of renal stone has become more prevalent than before, which may be related to the broad use of potassium citrate in this regard, urinary pH was measured every month to keep the patients’ urine pH levels between 6.8 and 7.2 by modifying the drug dosage.

The present study had some limitations. First of all, the 24-hour urine metabolic tests were not performed on the patients. Second of all, the present study is a pre-and post-interventional study without any control group with a short follow-up period. To evaluate the potency of potassium citrate in patients with renal stones, further studies with a longer duration of follow-up are warranted.

All authors claim that there is no competing interest.

There was no founding.

The study was performed prospectively under the Tehran University ethical committees after receiving the Iranian Registry of Clinical Trials (IRCT20190624043991N6). All patients signed informed consent before enrolling.