Introduction: Percutaneous nephrolithotomy (PNL) is widely used for kidney stones. One of the complications of PNL is Systemic inflammatory response syndrome (SIRS), which is of great importance. Here we wanted to estimate the effectiveness of neutrophil to lymphocyte ratio (NLR) and platelet-to-lymphocyte ratio (PLR) in predicting SIRS following PNL.
Methods: This study is prospective observational work done in 2018-2019 in Isfahan, Iran, on patients diagnosed with kidney stones that were candidates of PNL. We collected patient demographic data, including gender, age, and size of kidney stones. Information about the operation duration, procedures, and laboratory data were collected before and after the procedures. All data were compared between patients with or without SIRS after PNL.
Results: In the present study, 152 candidates for PNL entered the research. The average age of the patients was 52.1± 13.4 years. In this study, 95 patients (62.5%) were male, and 57 (37.5%) were female. The average stone size was 29.4± 5.3 mm. Based on our data; 26 patients (17.1%) had sepsis after the procedure. There was only a significant difference between groups of patients regarding primary stone composition in the way that 92.3% of cases with sepsis had two stone compositions while 44.4% of other patients had two stone compositions and 50% had one stone composition (P-value<0.001). We found that patients that had sepsis after PNL had significantly higher operation duration (P-value=0.044) and significantly higher packed cell transfusion (30.8%) compared to other patients (4%) (P-value<0.001). The NLR below 72.2 could predict sepsis after PNL with 80.5% sensitivity and 33.3% specificity. Furthermore, the PLR below 63.3 could predict sepsis after PNL with 90.9% sensitivity and 5.3% specificity.
Conclusion: Elevated NLR and PLR are associated with increased frequencies of SIRS after PNL. These data could be used effectively in predicting SIRS in these patients. 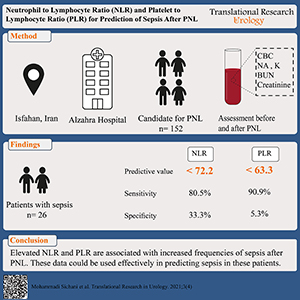 Percutaneous nephrolithotomy (PNL) is the procedure for stones larger than 2 cm in patients with kidney stones. PNL is a procedure used to remove kidney stones from the body when they cannot pass on their own (1). Based on epidemiologic data, 27 surgeries from 100000 surgical procedures are related to PNL in hospitals that have been increased in the past two decades (2). Despite the progress in equipment and considerations before surgery, including prophylactic antibiotics. Patients still experience systemic and sometimes fatal infections after surgery (3).

Urosepsis is an essential complication after PCNL, even with antibiotic prophylaxis and sterile urine before surgery (8). Urosepsis refers to sepsis caused by a urinary tract infection. The presence of signs and symptoms in patients with systemic inflammatory response syndrome (SIRS) is required to diagnose urosepsis. Based on studies, the presence of 2 of the following four items are required (9):

Among the biomarkers predicting sepsis, procalcitonin has been reported as a biomarker with optimal diagnostic accuracy, but further research is needed to provide better predictive tools (11).

An inflammatory factor in many diseases, including heart disease, is the neutrophil to lymphocyte ratio (NLR) (12). This marker also changes in other conditions such as dehydration and volume increase. The use of NLR in predicting the progression of many inflammatory and cancerous processes has been investigated, and some studies have claimed that the NLR of more than 2.5 could be valuable in predicting sepsis after PCNL (13, 14). Many types of research have shown that inflammation has essential effects on the onset and progression of kidney stones, and NLR is also a strong predictor of the progression of diseases, for example, diabetes, hypertension, dyslipidemia, obesity, atherosclerosis, and metabolic syndrome (15).

Studies have also shown that the chance of stone formation and complications after PCNL is associated with metabolic syndrome. Platelet-to-lymphocyte ratio (PLR) is another inflammatory factor that suggests a poor prognosis in cancer patients (16). However, very few studies have investigated the use of these markers in conditions including urosepsis.

Our study is prospective observational research done in 2018-2019 in Al-Zahra Hospital, Isfahan University of Medical Sciences. The current study was conducted on patients diagnosed with kidney stones that were candidates of PNL. The research procedure was approved by Isfahan University of Medical Sciences and the Ethics committee (IR.MUI.MED.REC.1398.062).

The inclusion criteria were age over 18 years, diagnosis of kidney stone by an expert urologist, being a candidate for PNL, and complete informed written consent to participate in this study. The exclusion criteria were changes in the treatment method for any reason, renal abnormalities, urinary tract infection before surgery, fever, and symptoms of SIRS before surgery.

All eligible individuals were registered in the study from January 2018 to January 2019. We obtained patient demographic information, including gender and age. The size of kidney stones was evaluated by CT scan, and we checked the following laboratory data before the procedures: complete blood count (CBC), sodium (Na) potassium (K), urine analysis (U/A), blood urea nitrogen (BUN) and creatinine (cr). Data regarding access size, number of accesses, double J insertion, and nephrostomy tube during surgeries were also collected.

Prone position was used for all patients during surgery, and sterile distilled water was used to wash all patients. The duration of surgery was calculated for all patients from the beginning of anesthesia. The mentioned laboratory data were checked 6 hours after the PNL and daily. All patients received the prophylactic antibiotic ceftriaxone after surgery. Ceftriaxone continued after the procedures unless there was a symptom of sepsis and the need for antibiotic change, which was decided after blood and urine cultures.

The patient's vital signs were recorded in the chart in case of SIRS symptoms, including 2 of the following 4 cases: 1- Fever above 38 ° C or below 36 ° C 2- Respry rate more than 20 3- Heart rate more than 90 beats in Minute 4 – Number of White blood cell less than 4000 or more than 12000. We also repeated the urine culture (U/C), U/A, and blood culture (B/C) tests, and if the sepsis was confirmed, the patient was allocated to the sepsis group.

After data collection, the data were entered into SPSS software version 25 and were statistically analyzed. Statistical data was reported as Mean± SD and quantitative data as number (%). Chi-square and independent example t-test or Mann-Whitney exams were used to analyze the results. For NLR and PLR, according to the cut-off point obtained, the indicators of sensitivity, specificity, predictive value, and accuracy were calculated. In all analyzes, P-value<0.05 was measured as a significance threshold.

Table 1. Evaluation and comparison of demographic and basic data among patients Figure 1. Evaluation of ROC curve for NLR and PLR.

Sepsis following PNL is a vital complication that requires immediate treatment and could be life-threatening. Diagnostic and predicting markers have been evaluated in previous studies, but no solid strategy has been developed in this regard. In our research, we evaluated the use of NLR and PLR in forecasting sepsis following PNL.

In 2017, a study was conducted on 192 patients who had surgical PCNL procedures for kidney stones. They evaluated various factors among patients with SIRS after PNL and showed that when the cut-off value of PLR was 114.1, SIRS progression was foretold with 80.4% sensitivity and 60.2% specificity. They also showed that pre-operative PLR is a valuable and low-cost biomarker that can predict SIRS after PNL (1). Another study by Akdeniz and colleagues was performed in 2021 in Turkey on 228 candidates of PNL. It was reported that C-reactive protein (CRP), NLR, PLR, and stone size could have beneficial roles in predicting SIRS after PNL. They mentioned PLR >117.36 as an important predictive marker for this issue (2). The results of our study were in line with these results, highlighting the importance of NLR and PLR in predicting SIRS following PNL.

Another study by Demirtaş and colleagues in 2020 showed that once the risk factors for fever are eliminated, lymphocyte counts and NLRs appear to be easy and cost-effective symptoms for predicting postoperative fever in patients undergoing PCNL (1). It was also indicated that one of the most influential and valuable infectious biomarkers with evidence of bacteremia is peripheral blood leukocyte ratios (1).

The critical point of our study was that we provided a cut-off point for NLR and PLR and evaluated their specificity and sensitivity. So far, few studies have evaluated these markers among PNL candidates, but other conditions have also been evaluated. As de Jong and colleagues showed, high values of NLR and PLR are strongly associated with decreased survival rates in patients with adrenocortical carcinoma (3). Another study by Ince and others in 2020 reported that in the ROC curve analysis, NLR had the highest differentiation power in the distinction between cellulite and healthy individuals with a sensitivity of 91.6% and a specificity of 89.8% (4). Another study by Demirdal and Sen showed that PLR of >187.3 was intended as the cut off value with 67.9% sensitivity and 59.1% specificity in predicting osteomyelitis, and an NLR of >6.5 was intended as the cut off with 53.3% sensitivity and 63% specificity in forecasting peripheral arterial disease (5). These data show the effectiveness of these markers in inflammatory and cancerous conditions.

The evaluation of lymphocyte markers in predicting SIRS after PNL is of great importance. As the results of former studies indicated, increased amounts of NLR and PLR could be associated with increased risks of SIRS. In 2020, Zhu and colleagues showed that elevated pre-operative NLR and PLR could be used as markers for fever and SIRS after PNL (6). We believe that by using these markers, preventive efforts could be made to reduce the risks of SIRS after PNL, and as a result, further studies should be performed in this regard.

Elevated NLR and PLR are associated with increased frequencies of SIRS after PNL. These data could be used effectively in predicting SIRS in these patients that were in line with former studies. We also recommend that further studies with a preventive basis should be performed in this regard.

Special thanks to the Department of Urology, Isfahan Research Center for Kidney Transplantation, Isfahan University of Medical Sciences.

All authors claim that there is no competing interest.

The research procedure was approved by the Research Committee of Isfahan University of Medical Sciences and the Ethics committee (IR.MUI.MED.REC.1398.062).