Introduction: Nephrolithiasis is one of the most common prevalent diseases in the human population, with a high recurrence rate. Although the prophylaxis effect of potassium citrate in renal calculi is well known, its therapeutic effect on melting kidney stones is not well-understood. This study aims to evaluate the therapeutic effect of potassium citrate on rats with nephrolithiasis.
Methods: Thirty, 4 to 6-week-old, male and female Wistar rats weighing 200±11 g were studied. After a one-week acclimatization period, the rats were randomly assigned into three groups using a computer-generated randomization list: Group A (control group), Group B (ethylene glycol receivers), and Group C (treatment group) for four weeks. For further pathologic examinations of the urinary system, two rats, including a male and a female, were randomly selected from each group and were sacrificed. Their urinary system, including kidneys, ureters, bladder, and urethra, was extracted for pathology and serologic examinations.
Results: The ethylene glycol group demonstrated Bowman's capsule hemorrhage and glomeruli size decrement in microscopic examination compared to control subjects. Although the changes were present in the mice of simultaneous exposure to Potassium Citrate and ethylene glycol, their extent was much less in the treatment group.
Conclusion: Although histopathologic studies suggested that potassium citrate may prevent rat ethylene glycol in stone formation, radiologic examinations were inconclusive. 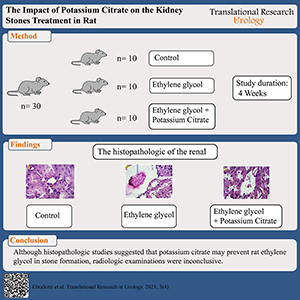 Nephrolithiasis is a prevalent disease in the human population with a high rate of recurrence. The exact pathogenesis of calcium oxalate calculi is not well understood, as multiple parameters are getting involved. Nephrolithiasis is a genuine global health issue with a high recurrence rate (1,4). The most common risk factor is dehydration, and the most common cause tends to be hypercalciuria, and hyperoxaluria and hypocitraturia are in the next steps. The 24-hour-urine is one of the indispensable evaluations of nephrolithiasis, which is used as a part of extensive metabolic workup.  So, urologists could put their efforts into correcting the underlying diseases. Some of the essential urine metabolites such as calcium, oxalate, magnesium, citrate, cystic, and uric acid are measured in this examination (5,7).

Ethylene glycol (ethane-1,2-diol) is an organic compound with the formula of (CH2OH). This compound is generally used as a raw material in manufacturing polyester fibers and antifreeze formulations in automobiles. It is an odorless, colorless, sweet-tasting, viscous liquid. It has been accepted that this compound could cause hyperoxaluria by Inducing excrement of oxalate and calcium and, consequently, the formation of urinary calculi animals. Some researchers claimed that hyperoxaluria is an even more important risk factor than hypercalciuria in nephrolithiasis. So, the elevation of the excretion of this metabolite could be more indispensable than calcium (8). Thus, we used ethylene glycol in rats to induce calcium oxalate calculi.

Potassium citrate is an integral part of treatment in nephrolithiasis. This medication has two significant effects. Firstly, it elevates urinary citrate in patients with calcium calculi. Secondly, it changes the urinary PH to alkalization, which is therapeutic for uric acid and cystine stones. The epithelial calcium (Ca2+) channels TRPV5 and TRPV6 are members of the transient receptor potential (TRP) channel family TRPV (“V” for vanilloid) subgroup. Other possible mechanisms are calcium-binding by citrate in the intestine, bone turnover decline because of systemic alkalization, and direct impact on TRPV5 activity in the distal renal tubule. In 1985, potassium citrate was approved by the Food and Drug Administration (FDA) to manage metabolic disorders of renal calculi.  This medication is available in three-drug forms:  powder, oral solution, and extended-release tablets (9,11). Although the prophylaxis effect of this medication in nephrolithiasis is well known, its therapeutic effect of melting kidney stones is not well-understood.  This study aims to evaluate the therapeutic effect of potassium citrate on rats with nephrolithiasis.

Ethylene glycol with a purity of ≥99.5% was used with was purchased from Sigma-Aldrich incorporation (Darmstadt, Germany). Potassium citrate dosage was 0.75 m eq in 500 cc water used for one month, Nooria Darman Pasargad incorporation (Alithrol).

Fifty-four, 4 to 5-week-old Wistar rats were included in the study with 200±11g weight. The rats were housed and caged in the animal facility at the Urology Research Center of Sina Hospital under an approved institutional animal care and use committee protocol (Ethical code: IR.TUMS.VCR.REC.1398.888).

Animal Grouping and the Modeling Method

After a one-week acclimatization period, the rats were randomly allocated into three groups using a computer-generated randomization list:

Regarding the environmental conditions, the mean temperature and humidity were 24±1ºC and 50-55 percent, respectively, with a 12-h light-dark cycle. A mixture of 43 percent of vegetable proteins and grains consisted of the animal's chow. Before any intervention, one male and one female rat were randomly selected from each group to perform a CT-Scan to ensure no evidence of stones. T rats. The rats of every group were stained and numbered with the yellow color of Picric acid in different parts of their bodies (head, foot, right hand, and the waist for the groups A, B, and C, respectively). The period dedicated to every group of animals' experimentations was one month.

Blood samples were collected from each rat, and the measurement of serum urea, uric acid, creatinine, calcium, phosphorus, and total protein levels was performed and compared to each other.

For further pathologic examinations of the urinary system, two rats, including a male and a female, were randomly selected from each group and were sacrificed (Figure 2). Their urinary system, including kidneys, ureters, bladder, and urethra, was sent to the pathology center of Sina hospital of Tehran University of Medical Sciences for H&E staining, histopathologic examinations, and other experiment outcomes. Other organs of those rats were applied in another ongoing study in the same facility.

After the four-week interval, four animals (2 males, and two females) were randomly selected from each group and were anesthetized with 2% Xylazine and 5% ketamine. Afterward, the rats were placed supine on the LOTUS-in Vivo Micro-CT (Advanced Medical Technologies & Equipment Institute, Tehran University of medical sciences, Tehran, Iran) Table. Different radiographic images were captured in coronal and transverse planes.

In serum specimens of the Potassium Citrate plus ethylene glycol group, there was a significant difference in urea, uric acid, and creatinine compared to the control group in both genders; besides, a significant increment was seen in the level of phosphorus of female rats. The serum level of urea in the same group experienced a notable rise, regardless of gender, compared to rats of the ethylene glycol group; however, in the same comparative setting, just male gender rats met the level of significance uric acid and creatinine's level. The results are detailed in Table 1 and Figure 1. The findings of the histopathologic examinations are presented in Figure 6. The size of glomeruli decreased in rats in the ethylene glycol group compared to controls with normal tissue. Also, more hemorrhage was observed inside the Bowman capsule. The percentage of lymphocyte cells in the tissue increased compared to other groups. Moreover, Necrosis of the Bowman capsule wall's epithelial cells was observed. In the central part of the tissue, the number of cells in the complex tubes far and near is unknown, indicating a change in cell structure.

Compared to rats receiving the ethylene group, those treated with potassium citrate showed a significant reduction in the quantity of the renal calculi and the stone's diameter. However, the complete resolution of the precipitated crystals was not observed.

On the other hand, renal glomeruli were smaller than usual in these groups, and bleeding was observed inside the Bowman capsule in some cases. In addition, epithelial cells in the wall of the Bowman's capsule showed Necrosis in some cases. In the central part of the tissue, some tissue bleeding was observed in the collecting tubes. Moreover, infiltration of interstitial lymphocytes was observed. Cell density and membrane were less pronounced in the near complex tubes and more concentrated in the distant complex tubes. In the medullary tissue of all collecting tubes with normal epithelial membrane was observed. Henle tubes were observed in this area.

The computed tomographic (CT) scan results have confirmed the formation of stones in the receivers of the ethylene glycol; however, there was no evidence of calculi in the control group. At the end of the trial, by evaluating the results of the radiologic examination in the rats of simultaneous treatment with ethylene glycol and Potassium Citrate, the size of stones was either undetectable or extremely small; however, the results of radiologic examinations were unreliable and not led to a definite and meaningful conclusion. A sample of this imaging is presented in Figure 2. Figure 2. A Sample of Computed Tomographic scans in rats with nephrolithiasis. After stone formation confirmation, in the treatment group the number and size of stones have decreased.

Based on the pathologic results of our study, in the potassium citrate group, the size of the stones in this group was smaller than the ethylene group and had a smaller number, but it was not eliminated. Furthermore, the results of radiologic examinations were unreliable and inconclusive. There was not any significant difference between serum markers in the two groups.

This study used ethylene glycol to construct hyperoxaluric stone in an animal model, which is the usual method in studies. This technique could evaluate a variety of medications. For example, Yousefi Ghale-Salami et al., examined the impacts of taraxasterol (an herbal extract) and potassium citrate on the ethylene glycol-induced urinary stones in the rat. They used ammonium chloride (0.75%, w/v) for three days and ethylene glycol (1%, v/v) to induce nephrolithiasis in rats. Like us, they examined and compared histologic changes in the urinary system. However, they measured urinary metabolites as well (12, 13).

Tanner et al., examined potassium citrate in a rat model of autosomal dominant polycystic kidney disease (PCKD) in 2000. Their methods were like our study. They found that the glomerular filtration rate of rats with PCKD that used potassium citrate from one month was average at six months. However, it was about one-third of normal in another group. Long-term potassium citrate management could Lengthen the median life span of rats with PCKD. They concluded that Rats with PCKD present abnormal renal metabolism of citrate and ammonia. Potassium citrate could preserve kidney function and lengthen survival by alkaline impact (16,18). In 2005 this team tried to put potassium salt in the regular diet of the Pcy mice model. Although this diet was not successful in preventing cystic renal disease, they concluded that this medication is harmless and could be considered a treatment for PCKD (19).

This is one of the rare animal reports of potassium citrate use in the urinary stones to extend our knowledge. However, they are some limitations that would be helpful in future research; those include a small sample size and a lack of imaging and urinary studies. At first, we wanted to utilize a (CT) scan to find out stones. Even though the CT scan results have confirmed the formation of stones in the receivers of the ethylene glycol, the imaging findings were unreliable and did not lead to a definite and meaningful conclusion. Future animal studies on urinary chemicals with radiologic confirmation are suggested to evaluate this medication's preventive and therapeutic effects.

All in all, we could conclude that histologically, potassium citrate could prevent ethylene glycol stone formation in rats. However, the results of radiologic examinations were unreliable and did not lead to a definite and meaningful conclusion.

Acknowledgments
Special thanks to Nooria Darman Pasargad for providing the Alitoral tablets.

Ethics statement
The rats were housed and caged in the animal facility at the Urology Research Center of Sina Hospital under an approved institutional animal care and use committee protocol (ethical code: IR.TUMS.VCR.REC.1398.888).