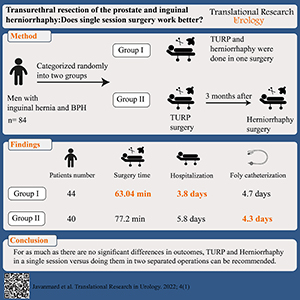 Benign Prostatic Hyperplasia (BPH) is a common condition in men, especially in the elderly. The incidence and amount of growth of the size of the prostate are increased with age (1). Clinical BPH is characterized by a prostate adenoma, which can cause bladder outlet obstruction (BOO), which often varies in severity (2). Because of the increasing life expectancy in the last decades worldwide, the rate of BPH and its complications has been augmented (3). Histological studies showed that the prevalence of BPH in the 4th, 6th, and ninth decades of life are 8%, 50%, and 80%, respectively (4). Due to this high prevalence rate, it is essential to pay more attention to BPH treatment in different conditions and its potential concomitant morbidities.

The present study aimed to evaluate the results of doing TURP and inguinal mesh herniorrhaphy in a single session versus doing them in two separate sessions.

In this randomized clinical trial, 84 patients aged between 51 and 82 came to the urology clinics of Shohada Tajrish Hospital, Tehran, Iran, from March 2017 to May 2020 and were candidates for surgical treatments of both inguinal hernia and BPH were selected. This study was approved by the ethics committee of Shahid Beheshti University of Medical Sciences with the code of ethics of IR.SBMU.MSP.REC.1396. 900. Those who had other kinds of hernia in companion with inguinal hernia were excluded. Another inclusion criterion was the absence of the history of the prostatic surgeries and any inguinal repairs. So recurrent hernias were excluded too.

With these confines, after obtaining informed consent from the patients and the volunteers, they were selected and separated randomly into two groups (Group I consisted of 44 patients and Group II consisted of 40 patients). TURP and mesh herniorrhaphy was performed in one admission and a single session in group I. In group, II TURP was done at first, and then after three months in another operation, their inguinal hernia was repaired. Surgery technique and anesthesia were similar in both groups. There were the same Pre-operation and post-operation protocols in groups I and II. Also, Patients had the same medicine protocols based on the guidelines, and they received antithrombotic prophylactic treatments if needed. Duration of surgery was considered from the time of the induction of the anesthesia to the end of the operation. The TURP and mesh herniorrhaphy periods were counted separately in group II, and their summation was documented in the analysis. After the surgery in both groups, the following data were attained: post-operation fever, inguinal hernia repair wound infection, possible mortalities, duration of hospitalization, post-operation Foley catheterization duration, and pain which was measured by a visual analog scale (VAS, maximum 10 points), before & after treatment IPSS and overall satisfaction.

The research followed the tent of the Declaration of Helsinki. The Ethics Committee of Shahid Beheshti University of Medical Sciences approved this study. The institutional ethical committee at Shahid Beheshti University of Medical Sciences approved all study protocols (IR.SBMU.MSP.REC.1396.900). Accordingly, written informed consent was taken from all participants before any intervention. This study was extracted from the M.D/MSc thesis of Seyed Hamidreza Hasani at this university.

Table 1. Demographics and clinical characteristics of the study population

Duration time of the operation in group I and group II were 63.04±6.8 mins and 77.2±8.5 mins by respect. The difference between the two groups was proved to be statistically signiﬁcant (p-value<0.01).

In 3 patients in the group, I and six patients in group II, infection of the wound of the hernia repair happened (6.8 and 13.6%, respectively). Overall, in both groups, 9.8% of patients with unilateral and 15.3% of the patients with bilateral hernia's caught wound infection. There was no statistical correlation between having a bilateral or unilateral hernia and the mesh herniorrhaphy site infection rate. Detailed results are shown in Table 2.

Table 2. Comparison of clinical and pathologic outcomes of the study population

In patients who had done prostatectomy, the incidence rate of inguinal hernia is 15-25%. The occurrence rate of inguinal hernia in the general population is about one-third of that, and the amount is 5%. Eight, there are some investigations on the causes of the concurrence of inguinal hernia and prostate issues. Some of them suggested that chronically increase in intra-abdominal pressure due to excessive effort during the micturition is the main reason for the high prevalence of inguinal hernias. In older patients, due to the weakness of the inguinal canal wall, hernia development is facilitated (3, 5). Since the anatomical sites of the prostate and inguinal hernia are nearby, it is possible to treat both in a single session. We have observed some other trials on this subject and all of them had more minor cases than our study. In the Dahami series on 31 patients, the overall progression rate was 86%, the morbidity rate was 10.7%, and the average hospitalization was 3.6 days (10).

Dhami's mentioned that TURP and mesh herniorrhaphy in a single session does not increase post-operation complications. Our trial confirms these results. Dhami's study has not spoken about Foley catheterization, and their effects on patient progression are not based on IPSS.in our results, duration of Foley catheterization and IPSS in both groups I and II had no statistical difference. In most trials that we had observed with the TURP and mesh herniorrhaphy topic, each of them had spoken about a part of the complications and the post-operation side effects, and none of them collected post-operation outcomes in a trial as we did. In another study, Cimentepe and colleagues (11) divided patients into three sub-groups. In the first group, they did TURP and mesh herniorrhaphy in a single session as we did. in the second group, they just did TURP, and in the last one, they did mesh herniorrhaphy alone. 91% of their cases were unilateral hernias, and the rest were bilateral.

There is no significant difference in complications between performing TURP and mesh herniorrhaphy in a single session versus doing them separately in the Cimentepe series. In Othman et al. trials, both groups' measured operation time had no significant differences (12). This result is unlike our estimated data. In our study, the duration of the operation in group I was significantly lower than in group II. In Othman et al., study, same as ours, the hospitalization time in both groups was statistically different, and the duration in group I was statistically lower than in group II. Othman used a (0-10 scale) in satisfaction issues, and they evaluated overall satisfaction two times after treatment. Unlike our study, three months after surgery, satisfaction in the cases who had done TURP and mesh herniorrhaphy in a single session was significantly better than in those who performed TURP and mesh in two separate sessions. After a year of treatment, overall satisfaction in both groups was not significantly different. It shows that the final amount of satisfaction in our study and Othman et al., the study is similar. It shows that our study's final amount of satisfaction and Othman et al., the study is similar. It should be noticed that their use of 10-unit scales for measuring satisfaction and doing one year of follow-up may be an advantage for the Othman series versus of us in satisfaction measuring. In the studies that we had observed, no investigations compared the duration of Foley catheterization. Duration of Foley catheterization in group I was longer compared to group two. There are some possible reasons for that.

In group, I, two surgeries at different sites were done at once. Although the total length of surgery in this group was lesser than in group II, if we consider sessions separately, the duration of operation in one session in group I was higher.  Duration of resection is one of the pre-operative factors that can guide effective catheter management after TURP (13). So, it can be a probable reason for a longer duration of catheterization in group I. moreover that Chalise et al., and some other studies mentioned that length of hospital stay correlates with the days on which the catheter was removed. Still, they just evaluated post-TURP catheterization, and its combination with inguinal hernia needs to be observed in future studies (3, 13, 14). To determine the way of healing BPH symptoms, we used the IPSS scale. In groups I and II, post-operation IPSS were dramatically lower than the pre-operation state. This showed that both single and separated session surgeries are significantly effective in healing prostatic signs and symptoms. In conclusion, we indexed the advantage and disadvantages of performing TURP and mesh herniorrhaphy in a single session versus doing them in separated sessions:

-lesser total time of the surgery

-no difference in post-operation pain (VAS)

-no difference in mortality

-no difference in post-operation UTI

-no difference in post-operation fever

-no difference in the overall satisfaction of the treatment

Because of the absence of a significant difference in the outcome, performing TURP and mesh herniorrhaphy in a single session is recommended. It permits patients to go through only one anesthetic procedure, hospital admission, and rehabilitation, and also it could be more cost-effective. Moreover, based on our results on catheterization, it is good to perform some more clinical trials with special consideration to this matter.

Acknowledgments
Special thanks to our colleagues and residents in the department of urology of Shahid Beheshti University of Medical Sciences, Tehran, Iran.

Ethics statement
This study was approved by the ethics committee of Shahid Beheshti University of Medical Sciences with the code of ethics of IR.SBMU.MSP.REC.1396.900.