Introduction: Cancer is considered a significant cause of mortality worldwide, and the mortality rate has been growing significantly in the last decades. The present study aimed to assess the effect of nisin on apoptosis and metastasis of human bladder carcinoma (5637) and renal carcinoma (ACHN) cells.
Methods: In this experimental study, the 5637 and ACHN cell lines were cultured and treated with diverse densities of nisin. The viability test was evaluated by MTT assay. The gene expression level of BAX, BCL-2, CEA, and Rho-GDI2 was examined by real-time PCR.
Results: The 430 and 230µg/mL nisin could suppress the proliferation of ACHN and 5637 cell lines, respectively. In both studied cancer cells, the expression of BAX, BCL-2, CEA, and Rho-GDI2 genes was significantly augmented with nisin exposure.
Conclusion: Our results discovered that nisin has cytotoxic effects on the ACHN and 5637 cells and prompts apoptosis over up-regulating the BAX/BCL-2 ratio in the 5637-cell line. Moreover, nisin might suppress the metastasis process via up-regulation of the Rho-GDI2 gene. 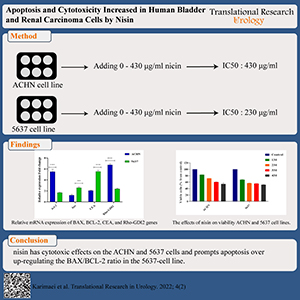 The second leading cause of death worldwide is cancer, and the death rate has been growing significantly in the last decades (1). Treatment adverse effects related to cancers cause economic burden and significant psychological to the affected nations. Furthermore, numerous cancer types, including skin, kidney, prostate, and breast, are rising worldwide (2, 3).

Therapeutic strategies are surgery, radiotherapy, and chemotherapy to eradicate the growing tumors (4). Surgery and radiotherapy are suitable for local treatments but not adequate for disseminated cancers where cancer treatment with a chemotherapy regimen remains the only choice. Chemotherapy is the sole effective strategy and has serious adverse effects due to recurrence potentials, non-selectivity of mark cells, and the emergence of resistant cancer cells to different drugs (5, 6). Thus, there is crucial to develop new, non-toxic, effective, selective, and safe biologic treatments such as antimicrobial peptides (AMPs) alongside increasing cancer types.

In recent decades, studies focused on using microbial metabolites and AMPs as potential therapeutic drugs to prevent cancer initiation and progression. Nisin is a strain of antibiotic bacteriocin created by Lactococcus lactis during fermentation (7, 8). FDA approved this antibacterial peptide in 1988 for human use. Also, this bacteriocin has been used as an apoptosis inducer. It reduces cell proliferation in HN SCC cells, so lately been verified to prevent the growth of the cancerous cells via apoptosis (9).

Apoptosis is an automatic cell death that happens in two pathways: 1-The intrinsic pathway and 2-The extrinsic pathway. The first pathway is the mitochondria intermediated apoptosis that happens with the involvement of the BCL-2 gene family. BCL-2 gene family comprises several proteins characterized in two clusters; the first cluster contains proteins through pro-apoptotic features, including BAK and BAX. The second cluster includes anti-apoptotic functions such as the BCL-XL gene and BCL-2 gene. Inconsistency among these clusters and overexpression of pro-apoptotic proteins enhances the apoptotic index but eventually cause apoptosis (10-12).

Moreover, carcinoembryonic antigen (CEA) is recognized and considered a usual biomarker for determining the cancer stage and follow-up of patients suspected of having urothelial carcinoma (13).  In some cases, increased levels of CEA have been established in transitional cell carcinoma of the bladder (TCC) besides the upper urinary tract (13). The elevating levels of CEA in the serum after surgery are associated with the progress of metastasis in colorectal cancer and other tumors of epithelial origin. Still, its exact role in Urological malignancies is unknown (14).

Abnormal signaling of Rho GTPases usually originates in numerous human cancers. RhoGDI2 is differentially expressed in different cancers at the mRNA and protein levels dependent on the tumor. It might contribute to aggressive phenotypes over the deregulating of the Rho GTPase signaling path, which makes it a good mark for cancer treatment (15, 16). RhoGDI2 may perform as a negative and positive regulator of cancer progression. Therefore, its role in tumor progression remains controversial (17). However, a previous study on human bladder cancer cell lines suggested that RhoGD12 is an essential factor in bladder cancer metastasis (18).

According to former documents on apoptotic nisin features, in this study, we investigated the influence of nisin on changes in two significant apoptotic genes expression, BCL-2, and BAX. The gene expression of RhoGDI2 and CEA was also evaluated in the human bladder cells (5637) and renal cells (ACHN) to expand further insight into the biological effects of nisin.

In this experimental study, human renal adenocarcinoma cells (ACHN) and human bladder carcinoma cells (5637) were bought from the Pasture Institute (Tehran, Iran). The ethical committee of Tehran University of Medical Sciences approved this study (IR. TUMS.SINAHOSPITAL-REC.1399.071). Cell lines were cultured in DMEM supplemented with 10% fetal bovine serum (FBS), 1% penicillin, and streptomycin and then incubated at 37°C, under 5% CO2 atmosphere and 85-90% humidity.

To assess the effect of nisin cytotoxic (Sigma; Aldrich-Germany) on the ACHN and 5637 cell lines, the MTT test was done based on our previous research. Briefly, 50000 cells were seeded to each well of 96-well plates containing 200μl 10% FBS DMEM at the culture condition. After overnight incubation and cell attachment, the cells were treated with different concentrations of nisin, including (130μg/ml, 230μg/ml, 330μg/ml, and 430μg/ml); after 24h from incubation, the medium was removed by 100μl DMEM minus FBS, 10μl of 5mg/ml MTT (Sigma; Aldrich-Germany) was supplemented for four h.

Then, the medium was removed and added 100μl DMSO (Sigma; Aldrich-Germany). The sample visual density was documented at 570 nm through an Eliza reader device (Biorad- USA). Each experiment was performed in triplicate.

The BAX, Bcl-2 gene expression, two central genes complicated in apoptosis, and CEA and Rho-GDI2 genes, Real-Time PCR, was completed. Fleetingly, 5×105 ACHN and 5637 cells were preserved with two diverse concentrations, including 430 μg/ml for ACHN and 230μg/ml for 5637 (based on IC50). After 24 h of incubation, total RNA was extracted by Invitrogen TRIzol reagent. Based on the manufacturer's instructions, the collected cell lines by centrifuge were incubated in 1mL TRIzol for samples immersed straight in TRIzol, then 200μL chloroform was added and shook for 15 seconds. At that time, the tube was centrifuged at 12000 g at four °C for 15 min. A high transparent liquid environment comprised RNA transported to another tube (1.5mL), and then isopropanol (500µL) was added. Gentle mixing by inverting for 15 seconds was done before incubating for 5 min at 25°C. The sample was centrifuged at 12000g at four °C for 10 minutes. The supernatant was removed, and the residual pellet was resuspended by adding 1mL of 75% ethanol. The sample was again centrifuged at 7500g at 4 °C for 10 minutes. Excess ethanol in the tube was removed, and the total RNA extracted was eluted with 20μL of DEPC water. The concentration of RNA and its purity were distinguished with a nano-Drop spectrophotometer. DNA impurity was determined by treating all RNA isolates with DNase I RNase free (Thermo Fisher Scientific, USA).

The consequences were communicated as mean ± SD of three independent tests. The ANOVA comparisons test determined variances between clusters; P-value≤0.05 was statistically significant.

Correspondingly, 5637-cell line, the survival was significantly reduced in nisin concentrations of 330 and 430μg/ml compared to the untreated cells. However, the cell viability of ACHN significantly was higher than negative control at 130 and 230μg/ml density of nisin (P-value <0.05). Figure 1. The effects of nisin on viability ACHN and 5637 cell lines. Cancer cells (50,000 cells/well) were untreated (Control) or treated with various nisin concentrations for 24 h. Viability was determined as an MTT assay.

The nisin effect on the gene expression was evaluated, and 5×105 cells were seeded in 6-well plates. Then, the expression of BAX, Bcl-2, CEA, and Rho-GDI2 genes mRNA was evaluated by Real-Time PCR. As presented in Figure 2, the Bcl-2 expression level significantly improved after treatment through 430μg/ml of nisin in ACHN cells (5.6-fold) compared to the untreated cells. Nevertheless, BAX gene expression in 5637 cells showed a significant increase. Moreover, the ratio of BAX/Bcl-2 and mRNA expression significantly augmented exposure to nisin afterward in 5637 cells compared to ACHN. A 1.5 times increase was detected for 5637-cells in 230μg/ml concentrations compared to the negative control. Different strains of bacteria form antimicrobial peptides (AMPs) as a policy to overcome competitive overgrowth situations by other invading species in a particular niche (21). However, it previously was reported that bacteriocins could inhibit the growth of only closely associated strains or species, but recently broad spectrum of antimicrobial activity was recognized for it. In addition, selective activity was displayed against distantly related bacteria and inhibited the growth of different cancerous cell lines (9).

Anticancer properties of these bacteriocins were associated with their cationic and amphiphilic nature. These cationic peptides are also recognized as membrane-active compounds interacting with negative charges on the cell's surface (22). The impact on cell membrane function mediates the Killing of cancerous cells due to the decreased amount of negatively charged molecules on the cell's surface (23). Although some AMPs could destroy the integrity of the mitochondrial membrane and cause apoptosis in cancer cells, others inhibit angiogenesis which is fundamentally necessary for tumor development (24, 25).

In this study, human bladder and renal carcinoma cell lines were used to study the effectiveness of nisin in apoptosis and metastasis of cancer. The cell viability depends on the nisin concentration. The highest rate of cell toxicity has observed once cells were exposed to the highest dose of nisin. Furthermore, nisin could induce noticeable apoptosis in the 5637-cell line compared to the untreated group. Theoretically, nisin can be introduced for future progress as a therapeutic agent for urological malignancies. The apoptotic effects of nisin in the SW1088 cell line have previously been shown to be consistent with our results (26).

Cancer cells display a high apoptotic threshold, and the apoptosis induction in these cells has been acutely affected. Unique features of AMPs enable them to induce apoptosis in cancer cells. Thus, they are regarded as potential agents for developing anticancer therapy (27). Some studies indicated that liquid biopsy is an excellent biomarker pool for renal cancer diagnosis and prognosis (11, 28, 29).

Nevertheless, based on our knowledge, there is no accessible research within the database on the nisin effectiveness on urological cancer cells, but there are few documents on colorectal cancer cells and head and neck cancer cell lines. Joo et al., (2012) suggested that nisin can be introduced as a promising candidate for the treatment of head/neck squamous cell carcinoma (HHNCC) (9). In this research, the nisin effect was assessed on the mitochondrial apoptosis pathway over the evaluation of Bcl-2 and BAX expression genes. Nisin can increase the apoptotic index (BAX/Bcl-2, ratio) in the bladder carcinoma cell line. However, the Bax to Bcl-2 ratio induced is the indicator of apoptosis initiation in the cancer cells, but no increase in this ratio was observed in the renal cells (ACHN).

Furthermore, the expression level of CEA and Rho-GDI2 genes was investigated with real-time PCR. The relationship between raised serum CEA and invasive tumors or the incidence of metastatic disease was verified in the malignant urothelium (30). The gene expression of CEA and Rho-GDI2 was significantly increased with nisin treatment. Previously described that a decrease of RhoGDI2 protein expression in bladder tumors is a predictor of the metastatic disease development and reason of death from bladder cancer, which shows its role as a metastasis suppressor (18). In brief, nisin might suppress metastatic growth via up-regulation of Rho-GDI2 genes, which is a metastasis suppressor. Nevertheless, to elucidate the anti-metastatic function of nisin, further investigations are needed on the expression of other genes associated with metastasis.

Our results discovered that nisin has cytotoxic effects on the ACHN and 5637 cell lines and persuades apoptosis over inducing the BAX/Bcl-2 ratio in the 5637-cell line. These results proposed that nisin can make apoptosis through intrinsic pathways and cause mortality of cancer cell lines. Moreover, nisin might suppress the metastasis process via up-regulation of the Rho-GDI2 gene. However, additionally investigates are essential to elucidate the exact instruments of nisin function.

The authors declare no conflicts of interest

There is no funding