Introduction: Shock wave lithotripsy (SWL) is a less-invasive procedure for treating a subgroup of renal stones. Since it may cause significant pain and anxiety during the procedure, several strategies have been proposed to reduce the discomfort during the SWL procedure. This study aimed to evaluate transcutaneous electrical nerve stimulation (TENS) as a non-invasive analgesic strategy during SWL.
Methods: A total of seventy-nine patients who underwent the SWL were included. The participants were randomly divided into two groups: the case group using conventional TENS (41 patients) and the control group without TENS. The visual analog scale (VAS) was recorded at the end of the SWL session. The analgesic (30mg ketorolac) was given in both groups due to the patient's request.
Results: Both study groups were similar in age, sex, BMI, history of SWL, hypertension, stone location, and stone size. Our data indicated less VAS in the case group than in the control group throughout the procedure, although it was not statistically significant (P-value=0.087).
Conclusion: TENS can be offered as a non-invasive and safe pain relief strategy during the SWL. 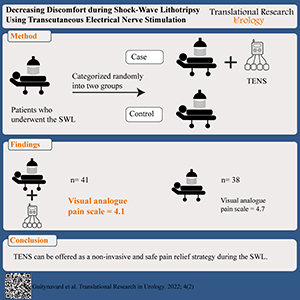 Urolithiasis is one of the most commonly encountered urological problems, with a lifetime prevalence of 1% to 15%, varying according to age, gender, race, and geographic location. Since the 1980s, Extracorporeal Shock Wave Lithotripsy (SWL) has become one of the first-line options for treating some renal and ureteral calculi. Even though the method is considered a less invasive technique, pain caused by shockwaves is still a significant concern (1-3). The pain can be the consequence of two factors: First, the increased pressure within the kidney, and second, the SWL-related trauma of the skin and muscles. Furthermore, the effectiveness of this procedure is strongly linked to SWL-related pain and anxiety (4, 5).

Pain during SWL may lead to a higher rate of kidney hematomas due to a blood pressure increase (6). Several medications and methods, such as local, intravenous (IV), or oral non-steroidal anti-inflammatory drugs (NSAIDs) and opioid agents, are considered for pain management during SWL (7).  The SWL has been widely used for treating urinary tract stones and is routinely administered as an outpatient procedure, although some patients do not tolerate it without analgesia (8). Transcutaneous electrical nerve stimulation (TENS) is a potential noninvasive pain relief strategy. In this method, low voltage electrical impulses transition through electrodes attached to the skin over the painful area. It is usually used to relieve a variety of painful conditions. A TENS unit contains an electrical signal generator, a battery, and a set of electrodes (9). Its mechanism is stranded by the ‘gate control theory of pain transmission. The analgesic effects arise from the electrical stimulation of non-noxious afferent nerve fibers in the skin, inhibiting the transmission of nociceptive responses through the dorsal horn of the spinal cord. This effectively ‘closes the gate’, thereby decreasing the transmission of pain signals from the source of acute pain in the periphery to the central nervous system (10).

This article aimed to investigate the effectiveness of TENS, compared with ‘sham’ (i.e., placebo) to reduce pain in SWL.

The study was approved by the ethical committee institute in Iran (IR.TUMS.VCR.REC.1398.1041), and written informed consent was signed by patients. This prospective, randomized, comparative clinical study was done in the SWL unit in the Sina hospital and included 79 patients scheduled for SWL. All patients underwent a baseline evaluation of the renal function, urine analysis, urine culture, serum creatinine, and an abdominopelvic computed tomography (CT). The patient characteristics, including age, sex, body mass index (BMI), history of hypertension, SWL, and the size and location of the stone, were also recorded.

The inclusion criteria were all patients with 6–20 mm renal stones. The exclusion criteria were coagulation disorder, uncontrolled hypertension, uncontrolled arrhythmia, abdominal aortic aneurysm>4cm, pregnancy, demand pacemaker, dermatological lesions at the site of SWL(e.g., eczema or dermatitis), drug or alcohol addiction, stone in a solitary kidney, congenital urogenital anomaly, American Society of Anesthesiologists (ASA) physical status classification> II, age<18 and >80 years, multiple renal stones, history of infectious or struvite stone, stents such as double J (DJ) in urinary tract system, patients with immunodeficiency, flank pain (VAS>0). Seventy-nine patients were allocated to case (TENS) and control groups based on block randomization with blocks of size 6. All patients received 500–1000 ml of Ringer acetate solution over 30 min during the procedure. No premedication was given.

Case Group: Forty Patients in this group were informed about the TENS application before the procedure. One channel was used, in which two stimulator electrodes were applied paravertebrally just above and below the lithotripter shock tube. A stimulation frequency of 80 Hz and pulse width of 250 µs was selected. The current intensity was started at 10 mA and increased gradually until the patient perceived a prickling sensation with no pain. At that moment, shock waves were started pulse width (duration), 250-microsecond pulses for 5 minutes in a 10-seconds-on 20-seconds-off duty cycle.

In both groups number of shock waves was 2500- 3000 shocks, with a frequency of 60-90/min, and voltage intensity was started at 1 kV and then increased gradually until a maximum of 16 kV. Pain scores were assessed with the 10-score linear Visual Analogue pain Scale (VAS). Parenteral ketorolac (30 mg) was given as the patient preference. At the end of each session, a questionnaire concerning the pain experience was completed by all patients using a visual analog scale (VAS; 0 no pain, 10 unbearable pain).

There were no significant differences between both study groups in terms of age, sex, BMI, history of SWL, hypertension, stone location, and stone size (Table 1). Figure 1 showed that the mean VAS score in the control group (4.8±0.27) was higher than the case group (4.1±0.25)), but this difference was not statistically significant (P-value>0.088).

IQR: Inter quartile range; Chi-squared tests were used for the association between categorical variables; and Man–Whitney U Tests for comparing continuous variables between groups, Because of missing value, a sum of percentage may not be equal to 100%. Table 2.  Pain intensity (VAS) at the end of the study according to baseline characteristics

VAS: Visual analog scale; values in each cell are frequency (Row percentage); OR: odds ratio; OR and P-value were calculated based on the Ordinal Regression Model.

Treatment of urolithiasis has been revolutionized with extracorporeal shock wave lithotripsy (SWL) due to its simplicity, non-invasive nature, efficacy, and minimal morbidity (11-13). Pain experienced during SWL is considered multifactorial, including the type of lithotripter used, frequency, voltage, age, and sex of the patient (14). There is no consensus on the standard analgesic regimen for controlling pain during SWL. Conventionally, NSAIDs, opioids, and local anesthetics are used frequently (15). Transcutaneous electrical nerve stimulation (TENS) is a non-pharmacological, non-invasive, and inexpensive analgesic technique that has been practiced for pain control in many clinical settings (16). Previous studies have also reported that TENS can be used efficiently during SW (17).

This article aimed to investigate the effectiveness of TENS, compared with 'sham' (i.e., placebo) to reduce pain in SWL.

The results of our study have similarities and differences with studies that have used TENS to manage acute pain. Karamaz and colleagues defined which TENS modality (conventional versus acupuncture-like) is more effective as an additional analgesic regimen during extracorporeal shock-wave lithotripsy (SWL). They proved that conventional TENS was more effective than acupuncture-like TENS in reducing alfentanil consumption and alfentanil-related side effects (18).

In the study, Randa Ali Shoukry and colleagues stated that TENS is an effective and safe practice in controlling pain during SWL, as it provides good analgesia and tolerability. It leads to a decrease in analgesic consumption and its side effects, with greater patient satisfaction. It decreases the time to discharge compared to fentanyl, which is ideal for outpatient procedures (9). In the study, O Reichelt and colleagues stated that TENS is a non-invasive, cost-effective method to achieve side-effect-free analgesia in SWL using third-generation lithotripters (19).

Finally, due to the study's limitations and the small sample size, it is recommended that a similar study with a larger sample size be conducted more comprehensively. It is also recommended to examine the subgroups related to the demographic characteristics of patients to determine the differences in demographic variables on the effectiveness of TENS.

TENS can be considered an effective and safe pain relief during SWL although not established in this study.

Special thanks to the Persian Registry for Stones of  Urinary System (PERSUS) to provide data and patients.

The authors have no conflicts of interest to declare.

All animal experimentations and the study design were approved by the Ethical Committee of Tehran University of Medical Sciences (IR.TUMS.VCR.REC.1398.1041).

Information, data, and photos will be provided if requested.