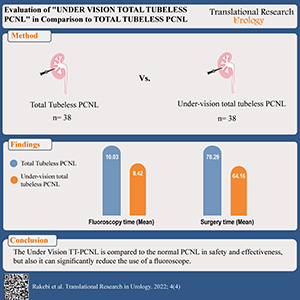 Percutaneous nephrostomy (PCN) was first described in 1865 by Dr. Thomas Hillier in London (1, 2). Although this modality is a minimally invasive procedure, several complications, such as postoperative pain, bleeding, renal pelvis perforation, and adjacent organ injury, may occur (3). In a prospective international multi-Center study of more than 5,000 patients, approximately 15% experienced significant complications after PCNL (3, 4). In addition, to better visualize the pyelocaliceal system, PCNL is usually performed under fluoroscopic guidance, which puts the patient, endourologist, and surgical staff to ionizing radiation exposure (5). Since radiation exposure can lead to an increased risk of lifetime cancer development (6, 7), exploring the methods to improve the surgical technique and reduce radiation exposure during PCNL is of utmost importance.

In the past two decades, numerous studies have been conducted addressing the modification of the PCNL procedure to augment its effectiveness, diminish complications, and reduce adverse effects (8-10). After stone removal, a PCN tube and a ureteric stent named double J (DJ) were placed. However, nephrostomy was connected to increased postoperative pain, the need for analgesia, and prolonged hospital stay (11, 12). On the other hand, the insertion of ureteric stents was correlated with an increased risk of hematuria, pain, and irritative lower urinary symptoms (13, 14). In this regard, the tubeless method was introduced as an alternative to the conventional procedure to refine the PCNL technique and reduce its morbidity (11, 12, 14-16). Although the tubeless approach has resulted in lower complications, excessive radiation due to fluoroscopy during PCNL still must be addressed.

Recently, we have proposed the "under-vision" approach as a novel PCNL technique in which access to the pyelocaliceal system is performed using the one-shot technique under a direct vision (17, 18). In this miniaturized technique, a ureteroscope equipped with amplatz and amplats sheath is guided into the access calyx targeted by a previously inserted safety guidewire. So, the access to the target calyx and visualization of the stone performs without the need for fluoroscopy.

Herein, we aimed to compare the tubeless PCNL using the under-vision approach with the conventional PCNL regarding safety, efficacy, and radiation exposure.

This randomized controlled clinical trial was conducted at Sina hospital, Tehran, Iran, from January 2019 to September 2020. The ethics committee of Tehran University of Medical Sciences approved the study, and the trial was registered at the Iranian Registry of Clinical Trials (IRCT20190624043991N1).

The indications of PCNL were considered the proposals of the American Urological Association (AUA) and European Association of Urology (EAU) guidelines. Laboratory examinations were noted. A non-contrast computed tomography (NCCT) exam was performed for each patient, with a slice thickness of 5.0 mm, reconstruction at 1.25 mm, and field of view of 50 cm.

Under general anesthesia, the procedure started with cystoscopic insertion of a 5 French ureteral stent in the stone side in the lithotomy position. Then the patient was repositioned into the prone position. After access direction, angle, and depth estimation, access to the pyelocalyceal system was performed by fluoroscopy guidance. Then, a retrograde injection of contrast media solution through the previously inserted ureteral catheter was performed to visualize the renal pelvis and calyces. Targeted renal calyceal fornix access with an 18G needle was performed and confirmed, a guidewire was included, the skin at the access site was cut to 1 cm, and a fascial dilator was applied for gradual dilation. After successfully co-axial dilatation on the guidewire, in a tubeless group, the "one-shot" technique was used to access the stone, and a tract was established with an indwelling of the 28-French sheath; whereas, in the under-vision tubeless group, after adequate dilatation, an amplatz and 28-French sheath placed on an 8-French ureteroscope, then, ureteroscope was placed on the guidewire through the tract, so, the access to the stone was performed under a direct vision (Figure 2). A 1.6-mm ballistic probe was used to fragment the stone. The energy settings did not differ between procedures. Stone fragments were removed with both forceps and irrigation. Figure 2: Ureteroscope with amplatz and sheath was placed on the guidewire through the tract, so  the access to the stone was performed under a direct vision

Fluoroscopy time was described as the total time for which fluoroscopy was used. Anesthesia time was defined as the time between induction of anesthesia and transfer of the patient to the recovery room. The surgery time was defined as the time between the entrance of the needle to the targeted calyx and the wound closure; In contrast, the access time was characterized as the time between the needle's entry to the targeted calyx and the entrance of the nephroscope and initiation of Lithoclast. Hemoglobin change was defined as the contrast between hemoglobin concentration before the operation and 24 and 48 hours after the operation. The modified Clavin classification system and the Comprehensive Complication Index (CCI) were used to describe complications after PCNL. Surgeon satisfaction was evaluated with a visual analogue scale where 0 points were extraordinarily dissatisfied, and 10 points were very satisfied.

To achieve a power of 80%, α of 0.05, and a confidence level of 95%, the minimum number of participants in each intervention and control group was calculated to be 38 (Figure 1).

Statistical analyses were completed using SPSS16 software. Values were reported by mean ± standard deviation (SD). Surgeon satisfaction on the Visual Analogue Scale (VAS) was reported as mean rank and mean and standard deviation. The normality of distribution for continuous variables was confirmed with the Shapiro–Wilk test. The student's t-test or the Mann-Whitney U-test compared continuous variables between two groups, depending on whether the statistical hypotheses were fulfilled. ANCOVA was used to remove the effect of baseline values during comparison. The chi-squared test or Fisher's exact test was used for categorical variables. The values are statistically significant when the P-value is <0.05.

For the last analysis, 76 patients were included. There was no significant difference between both groups concerning height, weight, gender, age, and body mass index (BMI). The location of stones (P-value=0.67) and stone burden (P-value=0.12) did not differ between the two groups. None of the lab findings measured on separate days differed among the groups. ANCOVA for day two creatinine, GFR, and hemoglobin using preoperative values as a baseline was insignificant (P-value=0.93, P-value=0.36, and P-value=0.52, respectively). Compared to the tubeless PCNL group, the mean fluoroscopy time was shorter for under–vision tubeless group (8.42±2.06 vs. 10.03±3.37; P-value=0.02). Furthermore, the novel under-vision PCNL reduced the surgery time from 70.29 minutes to 64.16 minutes; P-value=0.04). Despite decreased surgery time, anesthesia and access time did not differ significantly (P-value=0.80 and 0.67, respectively). Finally, surgeon satisfaction was considerably higher in under-vision PCNL. Detailed demographics and measured outcomes are presented in Table 1.

Table 1. Characteristics of cases in each group and measured variable for each intervention group. (values are shown as Mean±SD and percent)

Clavin's score after surgery was not more than 2 points in both groups. Fever occurred in 12 patients who underwent tubeless total PCNL and 10 patients who underwent total tubeless PCNL under vision (P-value > 0.05, data not shown). Blood transfusion was required in eight and seven patients in the two groups (P >0.05fp, data not shown). Pneumothorax, intraoperative bleeding ends to termination of surgery, damage to adjoining organs, nephrectomy, sepsis, and death did not take place in either group. The comprehensive complication index was lower in the under-vision whole tubeless PCNL group, but the difference was insignificant.

PCNL is an established technique used to treat large renal calculi. AUA (19) and EAU (20) have recommended PCNL as  first-line treatment for staghorn calculi, kidney stones greater than 20 mm in diameter, and lower calyceal stones in their latest guidelines on the management of renal calculi. Traditionally PCNL is performed in a prone position under the guidance of a fluoroscope, at the end of which the pyelocalyceal system drainage was provided by a nephrostomy tube and a DJ ureteral stent or ureteral catheter. Recently, tubeless (ureteral stent is placed, but nephrostomy tube is omitted) and even total tubeless (no ureteral stent and nephrostomy) PCNL have been introduced and gradually popularized (19, 20).

A trial study comparing "totally tubeless" PCNL to conventional PCNL with a post-procedure nephrostomy tube illustrated a significant reduction in hospital stay, analgesic requirement, and time to return to regular tasks with no increasing complications in the "totally tubeless" approach (21). These outcomes have also been mirrored in a single, small randomized controlled trial conducted in the pediatric population (22). In the case of a tubeless method, total healthcare costs are also reduced (23).

The initial stage in the percutaneous methods is to get to collecting system, which is usually achieved with fluoroscopy guidance. Many surgical methods have been proposed aiming at reducing radiation exposure. For example, according to some studies, PCNL under ultrasound guidance is highly successful and few complications can be a safe and effective alternative to fluoroscopy for experts (24). Despite its advantages, this technique has not become popular since endourologists are less familiar with ultrasonographic images, and the used equipment, such as the Amplatz dilator and sheath, have poor echogenicity (25, 26).

This study introduced a new approach using a ureteroscope to provide a direct vision into the access tract to decrease fluoroscopy time and radiation exposure. Our study showed that getting under-vision access to the stone can reduce the need for fluoroscope use and reduce radiation exposure. The time to access the stone was not statistically different between the two groups. It is considered because time for equipping ureteroscope with amplatz and amplatz sheath was considered in access to stone time. The surgeon's satisfaction was better in the under-vision tubeless PCNL group, while the surgeon's satisfaction was not assessed in other studies focusing on reducing fluoroscopy time. Higher satisfaction may be attributed to better vision and direct visualization of the stone. The complication rate was close to other similar studies. Although the CCI was lower in the under-vision PCNL group, it was not statistically significant. The changes in hemoglobin, creatinine, and GFR were not different between the two groups. Additionally, the length of hospital stay was similar in the two groups. These all showed that the new technique is comparable to the standard technique in safety.

Our study was limited due to the one-center nature of the study. Also, the study could not be double-blinded, causing potential bias toward under-vision PCNL when assessing surgeon satisfaction.

The new technique of under-vision total tubeless PCNL is safe and can be a rational option to reduce radiation exposure.

Special thanks to the Persian Registry for Stones of Urinary System (PERSUS) for providing data and patients.

The authors declare no conflicts of interest.

This manuscript did not receive any funding.

Written informed consent was taken from patients, and the ethical review committee approved the study at Tehran University of Medical Science, and the trial was registered at the Iranian Registry of Clinical Trials) IRCT20190624043991N1(.

All data generated or analyzed during this study are included in this article.