Putting Evidence to Practice in the Management of Patients Submitted to Radical Cystectomy: Outcomes from a National Survey

Introduction:
Radical cystectomy (RC) is recognized as the standard gold treatment for patients with high-risk muscle-invasive bladder cancer (MIBC) and non-MIBC (NMIBC). Admission and adoption of early recovery protocols following RC (ERPRC) are highly variable throughout the world. We sought to examine current practice patterns and adherence to early improvement pathways in the perioperative management of RC through a survey administered to national urologists.
Methods:
We conducted a multicenter cross-sectional study through a survey that addressed different components of the ERPRC. Two authors (ABS and JNP) reviewed the available ERPRC evidence. The questionnaire included 24 questions. Participants provided consent, and their anonymity was assured.
Results:
Sixty-six responses were gathered from 17 centers. 64% of the respondents mentioned not having a formal ERPRC in their center. However, high-volume cases showed a significantly higher ERPRC implementation rate (51.5% vs. 10.5% vs. 0%, P-value<0.05). In the preoperative period, anemia correction and avoidance of bowel preparation were the most implemented steps. Intraoperatively, urologists tend to follow ERPRC recommendations in the postoperative period. No statistically significant differences were found in ERPRC components adopted in the perioperative period and the median length of hospital stay (9 days, P-value=0.09), irrespective of surgical center volume. ERPRC is agreed by 77% of urologists to be useful or very useful for achieving better outcomes.
Conclusions:
Although most of the urologists pointed out that ERPRC was not formally implemented at their center, most parts indicated that ERPRC significantly improved outcomes during RC PO and, therefore, were followed. 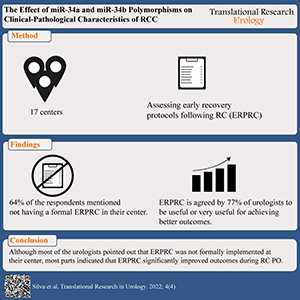 Radical cystectomy (RC) with lymph node dissection is identified as the standard gold treatment for patients with high-risk muscle-invasive bladder cancer (MIBC) and non-MIBC (NMIBC) (1). However, this procedure involves significant complications, with a 90-day postoperative complication rate of up to 70%, regardless of surgical technique (2-4). Protocols focused on the postoperative period have been designed to shorten recovery and limit complications. Nonetheless, this procedure includes considerable morbidity, with 90-day perioperative complication rates of up to 70%, disregarding of surgical method (2-4). Enhanced recovery after surgery (ERAS) is the most well-known protocol to focus on the postoperative period to shorten recovery time and limit complications and morbidity. For most of the points accosted by this protocol, the level of records is either low or adapted from colorectal surgeries–from which Enhanced Recovery After Cystectomy (ERAC) stemmed. Likewise, due to its recent introduction into RC, evidence of ERAS effectiveness in RC is sparse (4, 5).

We conducted a multicenter cross-sectional study by conducting a survey that addressed diverse components of early recovery after RC. The variable evidence was reviewed by Two authors (ABS and JNP) about early recovery in RC protocols. The intended questionnaire consisted of 24 questions, 6 of which were demographic, 17 included the conditions before, during, and after the operation, and a final question about personal opinion about ERPRC. First, the survey was designed and evaluated for ease of response. Afterward, it was converted into Google Forms, and the link was forwarded.

We addressed 17 out of the 22 checklist items of the ERAC protocol (6 pre-, five intra-, and five postoperative items and one regarding audit). The questionnaire applied is displayed in Table 1 (Supplementary). The survey was divulged by approaching urologists on an individual basis. Practitioners from different settings were asked to complete the survey. The participants were asked to fill in the form only once.

A cover letter explaining the study was set as an introductory note in the Google Form. Participants must give their consent before continuing the questionnaire. Anonymity was guaranteed. All answers were mandatory except for the one about each urologist's place of work.

Based on the recommendations of the European Association of Urology (EAU) guidelines on the influence of hospital surgical volume on treatment outcomes, we classified hospitals according to the number of RCs performed annually as follows: low-volume center (less than 10 RCs per year); intermediate volume center (10-19 RC/year) and high volume center (at least 20 RC/year). Samples were separated into two groups (ERPRC group vs. non-ERPRC group) about adopting an official ERPRC in the respondents' institution.

Categorical data were presented as frequencies and percentages. A descriptive analysis is presented as well as comparisons between centers with different RC volumes and between ERPRC and non-ERPRC groups, whenever possible. The Gaussian curve and Kolmogorov-Smirnov test were used to determine whether the data had a Gaussian distribution. Student's T-test for variables with normal distribution and Mann-Whitney U for non-distributed variables. The chi-square and Fisher's exact tests were used to compare categorical variables. Statistical analyzes were performed using SPSS version 25 (IBM, New York, USA). Statistically significant results were considered P-value<0.05.

Sixty-six responses were collected from 17 centers. Half of the responses were from urologists working at Academic Health Centres and a half from non-academic Regional Hospitals and Private Practices (Figure 1). The work of urologists as a specialist was between 4 and 18 years (an average of ten years as a specialist). About 67% work in high-volume centers (at least 20 RC/year), 29% in intermediate-volume centers (10-19 RC/year), and 5% in low-volume centers (less than 10 RC/year). 36% indicated having and adopting a formal ERPRC in their center. However, when comparing centers, high-volume centers showed notably higher rates of ERPRC implementation (51.5% vs. 10.5% vs. 0%, P-value<0.05).

Figure 1. Hospital Category Where Urologists Carry out Most of their Practice Regarding the existence of an official auditor of the protocol, just 33,3% of ERPRC group respondents stated to have one in their department. When comparing the experience from high-, intermediate- and low-volume centers, no statistically significant differences were found between the adopted ERPRC components. The median length of hospital stay was nine days (ranging from 7 to 10), with similar results between centers regardless of their surgical volume (P-value=0.09) or ERPRC group (P-value=0.2). ERPRCs are believed to help achieve better results in the RC postoperative period by 77% of urologists (Figure 2). Radical cystectomy is still the treatment that offers the best cure rates for patients with MIBC, very high, and high-risk NMIBC (1). However, RC represents a complicated procedure associated with high perioperative morbidity and mortality. Currently, the perioperative management of these patients remains a challenge for Urologists. Therefore, to answer the unmet need to diminish the morbidity in the perioperative period of RC patients, the ERAS society for Urology published the Enhanced Recovery After Cystectomy (ERAC) guidelines (5) in 2013. Since then, several studies have reported the outcomes of the ERAC protocol, with most demonstrating fewer complications, a faster bowel recovery, and a shorter length of hospital stay (4, 6, 7). However, the evidence for each of the 22-ERAS items remains low and is adapted from the colorectal surgery (5, 7), which could explain the variable acceptance of this protocol. A recent survey with a larger sample of respondents reported that the ERAC protocol was routinely followed by 73.6% of urologists (8). In another study, 36% of the respondents stated that they did not follow any principles of enhanced recovery. Even among urologists in the ERAC group, more than 50% assumed to omit more than two fundamental principles of the protocol (9). In our study, although most of the urologists reported not having a formal ERPRC in their center, the adoption rate was higher than 50% for 12 out of the 16 individual items.

The Enhanced Recovery After Surgery (ERAS) Society care pathways, primarily focused on colorectal surgery and first published in 2005(10), aim to reduce perioperative stress, maintain postoperative homeostasis, and speed up improvement after surgery. Since then, considering the continuously growing evidence concerning the multiple items approached by the protocol, several updates have been presented. The evidence shows that ERAS diminishes morbidity rates, improves recovery, and shortens the length of hospital stay after major colorectal surgery (11).

Preoperative medical optimization is a cornerstone in ERAC, as patients proposed to RC are often elderly and have multiple comorbidities. Smoking is the leading known modifiable risk factor for urothelial carcinoma. About 80% of patients undergoing cystectomy are or have been smokers. Besides the oncological benefit, smoking cessation four to eight weeks before surgery reduces the risk of postoperative complications, namely pulmonary and wound-associated ones. In our study, about two-thirds of responders said they counseled their patients to quit smoking before surgery. Anemia is another issue concerning medical optimization, as 37.5-53.3% of patients awaiting RC have anemia. In this regard, 88% of responders revealed screening and correcting anemia before RC.

The principle of preoperative bowel preparation is based on the potential risk reduction of infectious complications in the postoperative period by reducing the intestinal bacterial load. However, not only is there a lack of evidence to support this hypothesis, but it has also been shown in colorectal surgery that this practice may lead to dehydration and electrolyte imbalances, physiological stress, and, consequently, an increase in postoperative complications, namely, prolonged ileus, anastomotic dehiscence, bowel, and wound complications. In Urology, two prospective and one large retrospective series corroborated that evidence. In our study, 77% of urologists acknowledged bowel preparation avoidance before RC, which did not differ from other surveys reporting bowel preparation avoidance rates between 65 and 95% (8, 9, 12).

On the other hand, half or less of the respondents adopted nutritional risk assessment, avoidance of prolonged fasting, and carbohydrate loading preoperatively. Even so, we noticed a significant statistical difference regarding the adoption of those items between ERPRC groups; it is higher in the ERPRC group.

Validated items in the postoperative period, namely removal of the nasogastric tube by the end of the surgery, early per os feeding, routinely using sham feeding with chewing gum, prokinetics prescription, and thromboprophylaxis, are widely implemented. The use of a nasogastric tube delays the feeding restart and bowel movements. Thus, its routine usage is not recommended (11, 15). Concerning postoperative ileus prevention, in addition to avoidance of bowel preparation, minimizing opioid analgesia administration, goal-directed fluid management intraoperatively and early ambulation, early nasogastric tube removal, and feeding and sham feeding with chewing gum demonstrated to be beneficial (16, 17).

Although only 36% of the respondents admitted having an ERPRC protocol in their center, the statistically significant differences between cohorts with and without an implemented protocol (ERPRC vs. non-ERPRC) point to higher adherence to the steps listed in ERAC by the ones that have it. On the other hand, the center volume does not seem to be influential on the ERPRC components adopted.

Previous studies addressing early recovery protocols applied to patients submitted to radical cystectomy had already concluded that adopting measures towards lessening perioperative morbidity is highly variable (8, 12). Therefore, studies like these lay a strong foundation for research on the determinants influencing compliance with early recovery protocols while raising awareness of their relevance.

Some limitations must be cited:

Even so, we believe this study adds information based on real-world data and a basis for further development and focus on the perioperative care of patients undergoing cystectomy. Additionally, this study highlights the low implementation rate of some items that we considered detrimental, such as nutrition risk assessment or preference for minimally invasive surgery. Thus, some efforts must be undertaken.

Although most urologists pointed out that ERPRC was not formally implemented at their center, most parts indicated that ERPRC significantly improved outcomes during RC PO and, therefore, were followed. Most centers agree with the diverse elements included in the ERPRC. However, high-volume centers are more likely to adopt formal protocols.

Ethics statement
Due to the anonymous and voluntary nature of the manuscript, Ethics Committee approval was not required.