Prevalence of Acute Kidney Injury in Patients with Sepsis in Isfahan, Iran

Introduction: Acute kidney injury (AKI) is one of the most prevalent and extreme physio-pathological disorders in hospitalized patients, 20-40% of whom are hospitalized in the intensive Care Unit (ICU). Sepsis is the most commonplace reason for AKI in intensive care patients, accounting for 50% of ICU cases
Methods: This was a descriptive cross-sectional study conducted at Isfahan University of Medical Sciences from 22 October 2016 to 22 October 2017. Two hundred and thirty-two selected patients at Al-Zahra Hospital in Esfahan were enrolled in the study. Patients were followed for 10 days to determine the short-term mortality rate. Data were analyzed using a t-test and Chi-squared test using SPSS software (ver. 16).
Results: In this study, 232 patients with sepsis were evaluated. Their mean age (± standard deviation) was 69.9 (18.4) years. The mean age of patients with acute kidney Injury (72.7 years) was significantly higher than the mean age of non-patients (non-AkI) (66.6 years) (p-value= 0.012). However, the significant difference was not between the age groups, but the p-value was near the significant border. The mortality rate of patients (53.6%) was significantly higher than the non-patients (non-AKI) (29.6%) (p-value<0.0001).
Conclusions: This study showed that the prevalence of AKI was 57.3%, which was similar to the prevalence rate in other countries. A relationship was also demonstrated between AKI and mortality rate and showed that AKI increases the mortality rate. 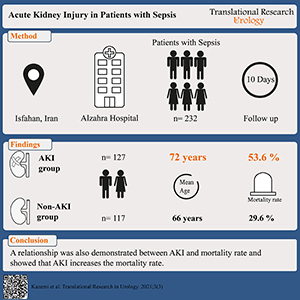 Acute kidney injury (AKI) is one of the most common and severe physio-pathological problems in hospitalized patients, 20-40% of whom are hospitalized inside the intensive Care Unit (ICU) (1, 2). According to the Kidney disease: Improving Global Outcomes (KDIGO) guideline, AKI is described as growth by  ≥ 0.3mg/dl in serum creatinine within 48 hours or 1.5 instances relative to the baseline degree of creatinine, or urine output  < 0.5 ml/kg.h inside 6 hours (3). Numerous motives can result in this ailment and sepsis is one of the major factors contributing to the development of conditions (4-6).

Sepsis is an extreme scientific disorder identified as a systemic inflammatory reaction as a consequence of the interactions between microbial antigens and additives of the primary immune system. Activation of the inflammatory pathways and coagulation are the main causes of damage and multi-organ issues in sepsis (7, 8). Sepsis is the most common cause of AKI in intensive care patients, accounting for fifty percent of  ICU cases (9). Septic AKI is characterized by intense sepsis and septic shock and is associated with worse effects together with prolonged clinic stay, fewer ventilator-free days, and extended mortality in comparison with patients with non-septic AKI (10, 11). Septic AKI appears to be distinct from non-septic AKI due to its underlying contributing factors, and the severity of injury and outcomes. AKI is more intense in septic patients than in non-septic patients, and even in sufferers with non-severe infections (eg pneumonia), the occurrence of AKI is appreciably higher (11, 12).

Numerous research has proven a relationship between AKI and sepsis (10-13). A study conducted on 3147 seriously ill patients confirmed that about 37% of them had sepsis; AKI became observed in 51% of the sufferers and ended in 41% mortality in ICUs  (13). Every other medical trial that used vasopressin or norepinephrine as a primary treatment for sepsis showed that AKI took place in 45% of the patients and nearly 30% of them wanted kidney transplants (10). The unpleasant prevalence of acute sepsis-associated damage, the need for systemic care and the necessity of treating those patients have prompted researchers to layout healing protocols and don't forget new opportunity treatment options (10, 12, 14).  Despite the significance of acute kidney injury because of sepsis and the necessity of treating those sufferers, there are no accurate records on the prevalence of AKI inside the patients with sepsis and their demographic variables in Isfahan up to now. This study aimed to study the prevalence of AKI in patients with sepsis and their demographic variables in Isfahan, Iran.

This descriptive cross-sectional study became permitted by the ethics committee of Isfahan University of clinical Sciences in 2016. From 22 October 2016 to 22 October 2017, 232 patients with sepsis diagnoses at Al-Zahra health center in Isfahan were enrolled in the study. The study was run under the Isfahan University of Medical Science and Health Services, Biomedical Research Ethics Committee after receiving the ethical code (IR.MUI.REC.1395.3.635) as my thesis [1]. Informed consent becomes acquired from all individual contributors included in the study and patients enter the study after signing the written informed consent. The inclusion criteria have been having sepsis and hospitalization at Al-Zahra clinic, while the exclusion criteria have been a loss of necessary tests, incomplete affected person facts, and records of persistent kidney injury. sufferers' information has been recorded prospectively. For the statistical analysis, the statistical software SPSS version 20.0 for windows (SPSS Inc., Chicago, IL) was used. The results obtained from the study were analyzed using statistical methods (mean ± standard deviation (SD) for quantitative variables and frequencies and percentages for categorical variables).

As shown in Figure 1, there is no difference between the mortality rate of patients with Kidney Injury and non-patients (non-AKI) in the 18-to 40-years-old age group. But there is a sensed 12- percent difference in the 61-to 80-years -old age group.

Table 2. The effect of AKI, age, and gender on mortality

The results showed the mortality rate in patients with Acute Kidney Injury was about 2.7 times higher than without AKI (non-AKI), which decreased to 2.6 after controlling the effect of age and gender(p-value:0.001). But the age and gender had no significant effect on the probability of morality(p-value> 0.05) (Table 2). 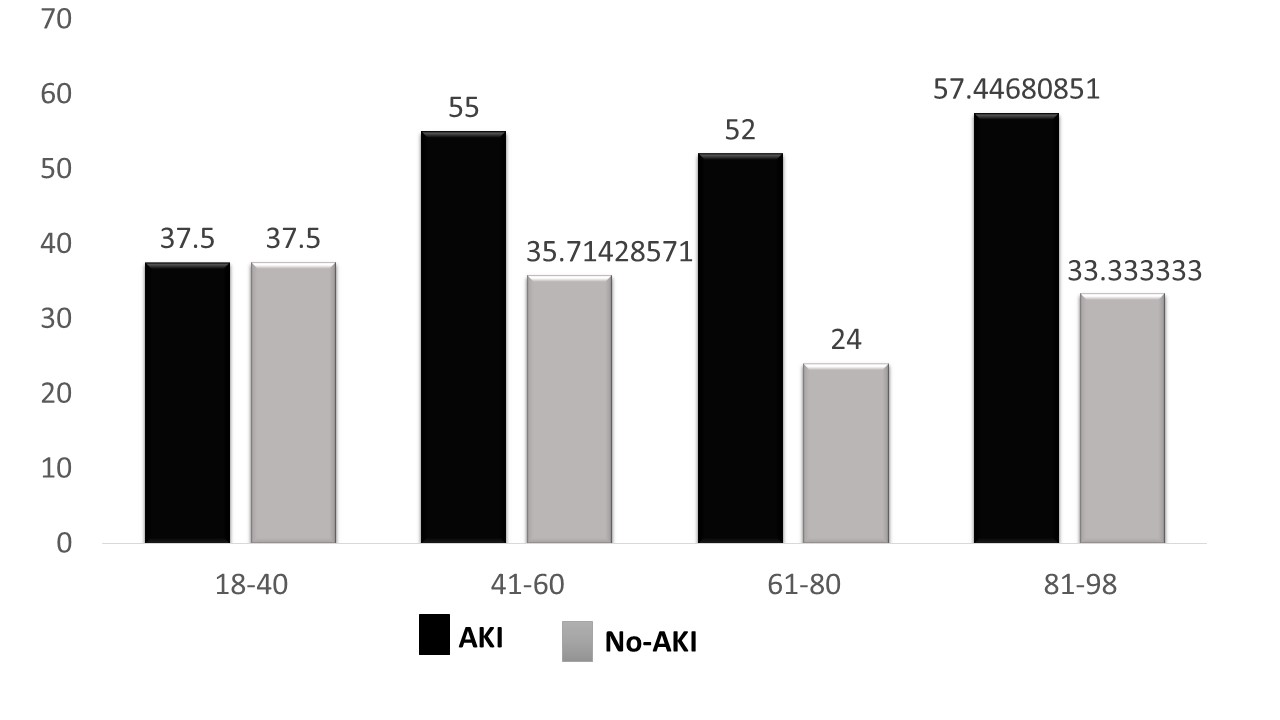 Sepsis-related AKI is a commonplace worry in hospitalized and critically ill patients that will increase the hazard of developing comorbidities and is related to high mortality (15-17) Remarkably, little is understood approximately the epidemiology of Sepsis-related AKI. this could be because of the shortage of consistent epidemiology between sepsis and AKI criteria and among researchers operating in those areas. Even just the worldwide incidence of sepsis is largely unknown (17). Adhikari et al., predicted up to 19 million cases worldwide per year, but the actual incidence is possibly to be an awful lot greater (18).

In keeping with the hunt inside the databases, this study has been performed for the first time in Iran. Observational studies have shown that the incidences of sepsis AKI are increasing (19,23) also, small single-center studies have proven that 11 to 37% of all septic patients have concomitant AKI (24-26). In our study, the prevalence of AKI inside the patients with sepsis became 57.3%,  which became consistent with Uchino et al.’s findings (9). They determined that almost 50% of patients with sepsis had AKI. Xu et al. in a retrospective study across china which includes 146148 patients, determined AKI in 47.1% of sepsis cases (27).

Numerous studies have shown exclusive mortality rates, varying from 20% to 60%. The mortality rate in the present study become 53.6%. In a retrospective study carried out by Bagshaw et al., (28) approximately 14 hundred patients with sepsis were investigated over 22 years and the rate of mortality was 17.9%, which had a tremendous distinction from our study. It seems that the reason could be associated with the type of study, the long-term study period of 22 years as well as the population of 14 thousand people, which was very different from the present study. Vincent et al., In a prospective cohort study that includes 1177 patients with sepsis throughout 24 European countries mentioned a fifty percent prevalence of AKI with an ICU mortality rate of forty-one percent which turned into steady with our study (29). In an observational study carried out on 415 sufferers with sepsis in Germany between 2003 and 2004, the prevalence of AKI in sufferers with sepsis in ICU was 42.6% at the same time as AKI septic incidence was 4.3%.  The mortality rate in patients with AKI, following sepsis, changed by greater than two times in comparison to the non-AKI patients with sepsis(30). A similar study carried out in fifty-seven ICU centers in Australia between 2000 and 2005 found that the aggregate prevalence of sepsis and AKI among sepsis patients become 27.8% and 42.1%, respectively. The AKI septic mortality was 3 times more than that of sepsis alone (20). The results of these studies confirmed our study.

Bagshaw et al., (28) observed that there has been a significant relationship between the incidence of AKI and age which was not consistent with our study. additionally, they recommended that the mortality rate be extended with age (28). In our study, although the significant difference was not between the age groups, the p-value was near the significant border. In some other studies, Collins et al found that during patients with AKI because of sepsis, older age had a higher mortality rate (6). This finding was constant in our study. in addition, Collins et al., observed that the intensity of the ailment, reduced urine output, and BUN was associated with mortality rate, which became not investigated in our study (6).

In this study, 61.7% of patients with sepsis had been male and 38.3% have been female. there was no giant relationship between gender and AKI. In a study by Collin et al., comparable consequences had been suggested (6).

One of the limitations of this study turned into a lack of proper cooperation and correct responses to questions, which have been tried to be managed through making appropriate conversation, imparting ok explanation about the studies procedure, and ensuring them about the point that their participation is voluntary and records could be saved private.

Special thanks to the Internal Medicine, Isfahan University of Medical Sciences, Isfahan, Iran.

Funding
There was no founding.

Ethics statement
The study was run under the Isfahan University of Medical Science and Health Services, Biomedical Research Ethics Committee after receiving the ethical code (IR.MUI.REC.1395.3.635).

Data availability
Data will be provided by the corresponding author on request.