Generalized Scrotal Edema as the First Sign of Gastric Cancer: A Case Report

Introduction: Gastric cancer is one of the most common cancers capable of distant metastasis, but Scrotal and penile metastasis are very unusual, and occasionally, the initial manifestation of a latent primary tumor is even rarer. Mechanisms of gastric metastasis have been suggested through different pathways.
Case presentation: In this study, we present a case in which a patient presented with painless swelling of the testicles and penis. The main was in the stomach. As far as we know, this is the first report of a scrotal and penile metastasis from gastric adenocarcinoma in Iran. At the time of diagnosis, these metastases had not yet been diagnosed with gastric cancer.
Conclusions: Therefore, gastric tumors can metastasize to the genital area through lymphatic vessels in a reversible pathway. However, Proper imaging studies can identify early sites.

Gastric cancer (GC) is one of the most common cancers. It can also be said that the second leading cause of death due to cancer is gastric cancer (1). It is common to say that gastric cancer is asymptomatic in the early stages and only 30 to 40% of distant metastases (2). The most common sites of metastasis are the peritoneum, lymph nodes, and liver. In more advanced stages of cancer, gastric cancer can affect the lungs, brain, bones, and soft tissues. Crokenberg's tumor is also common, but metastases from gastric cancers to ovarian are uncommon in women, and it is also rare in men to the genital area, with only a few cases reported (3-5).

There are known types of skin diseases that can manifest themselves in the form of scrotal pathologies. One of these very rare cases is metastasis to the scrotum. However, primary skin involvement is not uncommon. In a retrospective study of 4020 patients with metastatic cancer (1, 2). 10% cases of skin metastasis were observed, of which only one case of scrotal metastasis was reported with a prevalence of 0.02%.

Scrotal wall involvement due to metastasis is very unusual, and occasionally, the initial manifestations of primary occult cancers are less common. Various pathways have been suggested for the spread of gastric cancer, including hematogenous, lymphatic vessels, through the peritoneal surface and directly from the stomach wall. Metastasis follows a reversible pathway through the vas deferens or lymphatic vessels. Metastasis to the genital area is also uncommon. We present here a 53-year-old patient with unusual genital lymphedema as the initial manifestation of Gastric cancer (6, 7).

A 59-years old man with a history of tobacco abuse and addiction presented to the Urology clinic with a one-month history of bilateral progressive scrotal & penile swelling which was concerning for scrotal cellulitis. He also complained of frequent dysuria, nocturia, and post-void dribbling. The patient was afebrile with normal vital signs. He had dyspnea, moderate painless pitting edema of the suprapubic area, chronic cluster headache, and mild hyperlipidemia with no ascites, masses, hepatosplenomegaly, or stigmata of liver disease.

Performed on physical examination, the patient was afebrile and hemodynamically stable. His scrotum was edematous with areas of induration, and erythema. Additionally, no overt purulence, fluctuance, or crepitus were identified. There was left side palpable inguinal lymphadenopathy and also bilateral hydrocele was observable (Figure 1). 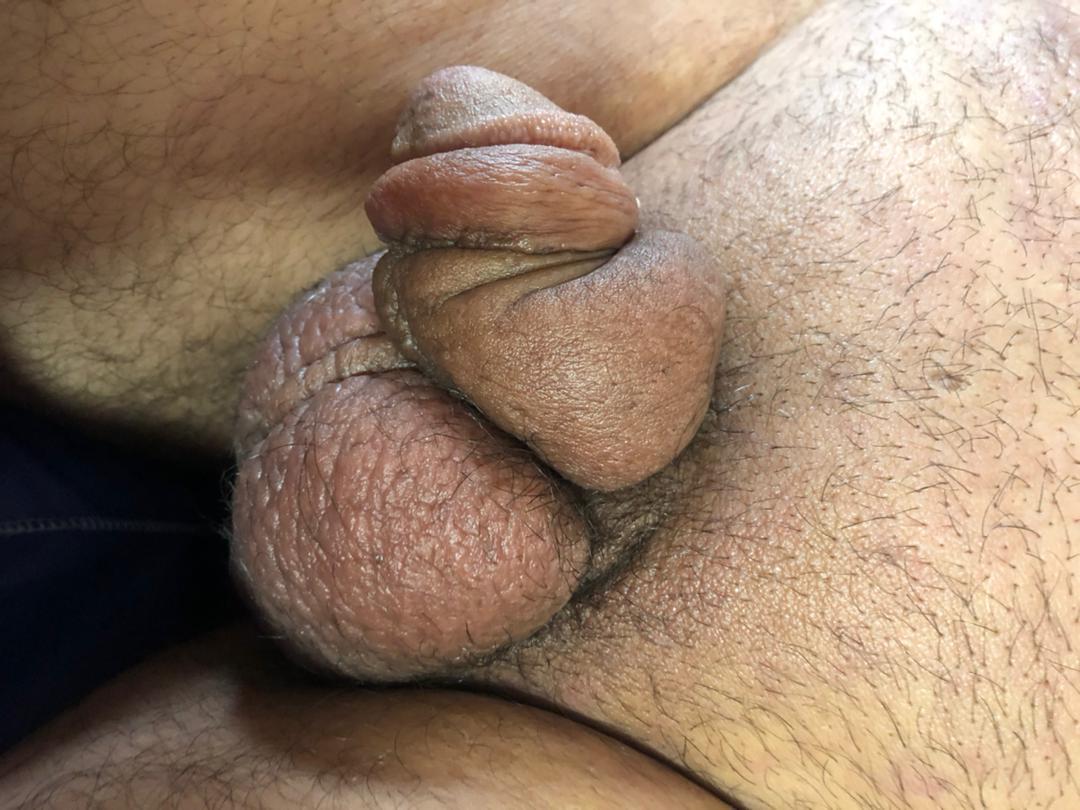 Figure 1. Edema of the scrotum and penis due to cancer

Workup for the scrotal swelling included a diagnostic ultrasound of the abdomen and pelvis, which showed no scrotal pathology (Figure 2). Equivocal involvement of the bilateral epididymis and grade II hydronephrosis, para-aortic lymphadenopathy, mild two-sided Piusel with left preference, increased scrotal thickness (21 mm) and hyper-vascular were noted on the ultrasound at that time. The increased vascular flow of the epididymis and testes suggested epididymo-orchitis, a Color Doppler ultrasound of the normal testis was performed for the patient. Increased vascularity of the mass lesion and bilateral small hydrocele were noted on color Doppler evaluation. Normal size and echo of the testicles and normal epididymis were also evident. 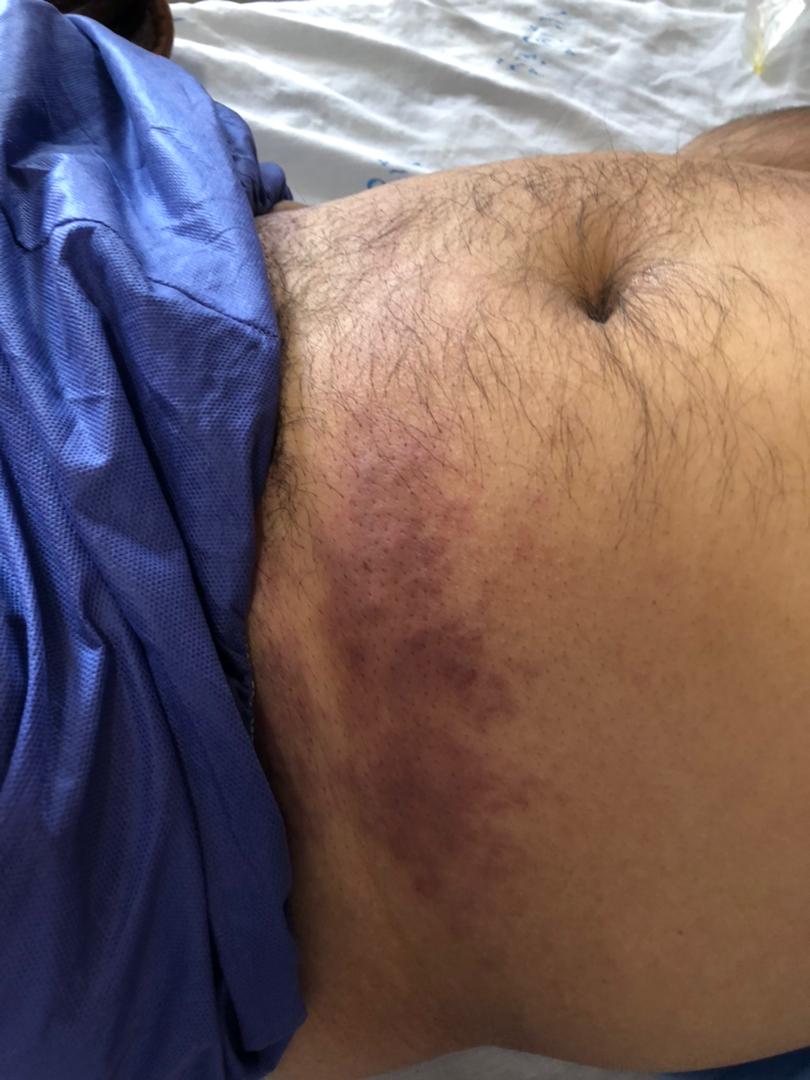 Concerning the possibility of genital lymphedema as a side effect of Verapamil and Topiramate usage, a neurology consult was performed, and the results revealed that due to long-term use (10 years) of these drugs, lymphedema, in this case, is not possible. Abdominopelvic Magnetic Resonance Imaging (MRI) with and without contrast showed: Diffuse scrotum edema and enhancement with bilateral hydrocele (Rule Out (R / O) of Fournier gangrene). Diffuse subcutaneous edema, ascites, and pleural effusion (R / O Congestive heart failure (CHF)). Then, according to the report of pleural effusion in MRI and rejection of CHF, cardiac and echo consultation was performed, which showed that CHF is not relevant for the patient.

Finally, an endoscopy was performed on the patient due to hematemesis and nausea, and vomiting that was resistant to medical therapy. Based on the endoscopy findings some accumulation of fresh blood was seen in the distal esophagus after suction, but no site of bleeding was found. A large mass with an ulcerative surface was seen in cardia (without the involvement of the Lower Esophageal Sphincter (LES)). Eventually, the patient was diagnosed with gastric adenocarcinoma based on the final pathology report.

Due to continued GI bleeding and vomiting, the patient was then transferred to the gastrointestinal (GI) ward. The patient was prescribed to continue treatment with Pentazole and maintain hemoglobin above 8. Then, a surgery consultant was performed for the patient, which showed that palliative surgery is necessary according to Gastric Outlet Obstruction (GOO) report. Finally, the patient underwent gastrectomy and reconstruction by Roux-en-Y(RY) method. Esophageal-jejunum anastomosis, retroperitoneal and bladder involvement, posterior peritoneal fibrosis, and compressive effects on the bladder and kidneys were significant. Subsequently, the patient experienced severe hypotension and a rise in creatinine to 2.25 due to anuria. The patient then underwent emergency hemodialysis. Finally, the patient died of the cardiac-respiratory arrest.

Scrutum and penis are uncommon metastasis sites. In this patient, the gastric tumor was the main lesion of the genital lymphedema, According to the patient's history of progressive gastric tumor and pathology results. Based on our literature review, the abdominal is known to be the most prevalent primary site of genital area metastasis (8). The other main origins of genital metastasis are prostate, liver, kidney, pancreas, lung, and colon (9). The prevalence of testicular and genital metastasis is very unusual, ranging from 0.02 to 2.5% (10).

Also, a para-aortic lymph node pathway connects the aortocaval and the lymph nodes of the spermatic cord. It is known that the main pathway of metastases from testicular cancer bypasses the pelvic lymph nodes. The lymphatic vessels of the testicles are located next to the gonadal blood vessels and rise through the spermatic cord and pass through the anterior part of the psoas muscle and terminate in the paracaval and para-aortic at the level of the kidney hilum. Metastasis also spreads downward in a reversible pathway (15). So, this return path of the lymph nodes can cause gastric tumor metastasis to the genital area.

Our report shows a rare occurrence of scrotal and penile swelling as an initial presentation of an aggressive metastatic gastric adenocarcinoma. When a patient presents with genital lymphedema and acute swelling, a testicular neoplasm is suspected based on the clinical examination, serum tumor markers, and ultra-sonographic examination of the testes. Inguinal orchiectomy is the initial standard of care, and pathologic examination of a resected testis renders the confirmatory diagnosis. Therefore, recent systematic review articles have shown that rare cancers are more associated with poorly differentiated GCs and sometimes present as a unilateral palpable mass in the genital area. Therefore, the palpable masses of the genital area in men, especially those with a history of gastric cancer, should not be ignored. (12). Although the prognosis is poor, successful resection of such a metastasis followed by chemoradiotherapy would achieve some survival benefits.

In conclusion, the tumor of the gastric can metastasize to the genital area through lymphatic vessels in a reversible pathway. This metastatic pathway overlays with that of metastasis from primary Testicular cancer. However, Proper imaging studies can identify early sites (stomach tumor vs. testicular tumor). If imaging results strongly show metastasis, before systemic chemotherapy, a simple US-guided biopsy can be used for verification rather than orchiectomy. Ultimately, Metastasis should always be considered in patients with a history of cancer, even if the patient underwent treatment years ago, including adjuvant chemotherapy and surgery.

Special thanks to the Department of Urology, Isfahan University of Medical Sciences, Isfahan, Iran.

The author declares that they have not known competing for financial interests or personal relationships that could have appeared to influence the work reported in this paper.

Written informed consent was obtained from the patient for the publication of his case.