The Effect of Pre-Transplant Psychosocial Problems on Kidney Transplantation Outcomes 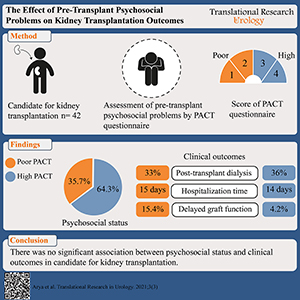 Chronic kidney disease (CKD) is one of the main health problems in the world. Significantly, CKD is associated with important clinical, social, and mental problems, particularly in patients with end-stage renal disease (ESRD), and ESRD is mostly established as an obvious reduction in kidney function (1). The frequency rate of ESRD rises every year. Even with the improvement of therapeutic principles and standards, the death rate remains great (2). In patients with ESRD, a reduction in renal function has been observed that the patients require receiving kidney replacement therapies including per­­itoneal dialysis, hemodialysis, as well as kidney transplantation.

It was observed that among patients with ESRD, long-lasting dialysis disturbs the quality of life, and manifested as the growth of depression rate, reduction of physical functioning, and social communication, and aggravation of clinical symptoms such as muscle weakness, leg restlessness, and fatigue (3). The previous documents showed that patients with ESRD had poorer quality of life than the general population (4, 5).

The present study population included all patients assessed for kidney transplant candidacy in Sina Hospital, Tehran University of Medical Sciences. The 42 patients who were a candidate for kidney transplantation were enrolled in the present study. The inclusion criteria of the present study were the patient had to be satisfied with participating in the study. So, verbal consent and written informed consent were obtained from all participants after explaining the study's aim to all the patients. The Ethics Committee of Tehran University of Medical Sciences approved the study (IR.TUMS.VCR.REC.1398.363).

The continuous and discrete variables are reported as mean (standard deviation (SD)) and number (percent), respectively. The paired t-test was the tool for comparing variables between the low and high groups. The statistical software Stata (ver. 12) was used to perform the analyses. The significant level was set at 0.05.

A total of 42 patients underwent kidney transplantation; 15 ( 35.7%) patients had a poor PACT score while 27 (64.3%) patients had a high PACT score. The demographic variables are shown between the two groups in Table 1. There were no significant differences in age, sex, marital status, literacy, insurance, supplementary insurance, smoking, or being head of household between the two groups.

The clinical outcomes between patients with poor and high PACT scores are displayed in Table 2. There were no significant differences between the two groups in clinical characteristics after kidney transplantation (P-value > 0.05).

Prior studies have indicated the PACT score to be associated with a lower mortality rate, shorter hospitalization, and readmission period (18-20). Freischlag et al., investigated the clinical efficacy of PACT in pediatric kidney transplantation and presented no significant differences between post-transplant dialysis, graft failure, hospitalization time, and delayed graft function between the low and high PACT groups (21). Our results are consistent with Freischlag’s study. But, in Hong et al’s study, the association between PACT score with hematopoietic cell transplantation (HCT) outcomes was assessed and indicated the high PACT score was significantly associated with race and higher quality of life in HCT recipients. Also, the authors mentioned the PACT could be considered a psychosocial tool for recognizing patients who need more attention and monitoring (22). The document indicated that support of family, adherence, and personality factors are the cause of the difference between low and high PACT groups (21). A current review document indicates the relationship between pre-transplant depression and a higher risk of post-transplant mortality in different solid organ transplants (23, 24).

We would like to thank the Tehran University of Medical Sciences.

There was not any conflict of interest.

The Ethics Committee of Tehran University of Medical Sciences approved the study (IR.TUMS.VCR.REC.1398.363).

All data and information will be provided on request.