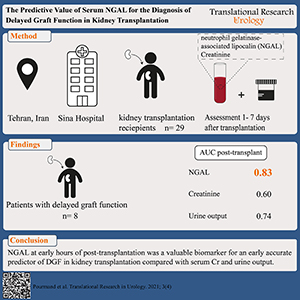 According to the Global Observatory Donation and Transplantation (GODT) data, 90,306 kidney transplants were performed worldwide in 2017 (1).  Kidney transplantation is the highest potential treatment for long-term survival for patients with end-stage renal disease (ESRD) (2). However, in some cases, acute kidney injury (AKI) can lead to allograft and early renal dysfunction, increasing the risk of acute or chronic rejection and chronic allograft nephropathy and consequently graft loss (3, 4). Delayed graft function (DGF) is one of the complications after kidney transplantation, which is defined as the necessity of dialysis during the first week after renal transplantation (5-8). The cause of DGF is related to donor and recipient parameters such as ischemia-reperfusion injury, immunological response, and immunosuppressive medications (9-11). The prevalence of DGF is significantly higher in the deceased donor (5-50%) than in the live donor (4–10%) in kidney transplant (12). Unfortunately, there is no effective treatment for DGF. However, early detection of DGF and intervention treatment may improve outcomes. Due to possible severe consequences of DGF, there is a necessity to identify early biomarkers that will rapidly and reliably detect acute and chronic allograft rejection and DGF.

Serum creatinine (Cr) levels are currently being measured to determine acute renal failure (ARF) (13). Unfortunately, Cr is an unreliable indicator during AKI because it is affected by many factors such as body weight, age, sex, and muscle metabolism (14, 15). Also, a detectable increase in Cr serum occurs at a stage where significant allograft damage has occurred. (16). Thus, neutrophil gelatinase-associated lipocalin (NGAL) has been introduced as an early marker protein for kidney dysfunction in various clinical settings (17, 18).

The clinical value of NGAL in predicting AKI associated with cardiac surgery and regular AKI with radiologic contrast has been demonstrated in several studies (19, 20). Hall et al. (21) showed that NGAL levels following kidney transplantation could predict the DGF, whereas serum Cr could not. Mishra et al. (22) demonstrated that NGAL expression was significantly increased in patients who developed DGF after transplantation, and they found a strong correlation between NGAL staining intensity and cold ischemia time as well as serum Cr. Most previous studies used urinary NGAL as a biomarker to predict DGF. Thus, there is not enough information on serum NGAL as a biomarker. Therefore, we conducted this study to evaluate the serum NGAL expression in the early postoperative phase after kidney transplantation and to examine the role of serum NGAL as a biomarker in predicting DGF and acute allograft rejection.

In this prospective cohort study, 32 adult patients who underwent first-time kidney transplantation at the Urology Research Center, Sina Hospital, Tehran, Iran, were enrolled from deceased and live donors from October 2017 to December 2018. But in three patients was not possible to recognize the DGF because of early acute rejection and mortality then these patients were excluded from the analysis. For patients under 18 years old, re-transplantation or combined transplantation with another organ and graft impairment caused by renal artery thrombosis or bleeding from the vascular graft anastomosis were excluded from the study. The development of DGF was evaluated in all patients, which is defined as a need for dialysis within the first week after transplantation (23). All participants received the same immunosuppressive regimen: thyroglobulin induction and prednisolone, mycophenolate mofetil, and tacrolimus. The Ethics Committee approved the Tehran University of Medical Sciences (Code: IR.TUMS.VCR.REC.1397.173), and the patients were enrolled after giving written informed consent.

Demographic and clinical characteristics of recipients and donors were collected from the patient’s medical records. Age, sex, height, weight, cause of end-stage renal disease, duration of dialysis before transplantation, and comorbid conditions such as diabetes, hypertension, and ischemic heart disease were collected. Besides, serum NGAL, serum Cr and urine output were measured preoperatively and postoperatively. All patients were followed within six months of transplantation, and all aspects of graft function, serum Cr, other complications, and mortality were recorded. Preoperative samples were taken before surgery. Postoperative serum NGAL was collected at first and seven days following the transplantation. Samples were immediately processed and stored at 70 °C. We utilized a commercial double-antibody sandwich enzyme-linked immunosorbent assay (ELISA) kit (Bioassay Technology Laboratory, Shanghai, China) for measuring plasma NGAL concentrations. Post-transplantation samples of urine output and serum Cr were measured at 1 to 14 days after transplantation and the day of the patient’s discharge from the hospital. Moreover, serum creatinine was measured at 1, 3, and 6 months after transplantation to evaluate the glomerular filtration rate (. Serum creatinine was measured by the Jaffe method (Roche Diagnostics).

Qualitative variables were reported as numbers or percentages and quantitative variables as mean ± standard deviation (SD). The normality distribution of data was tested using the Kolmogorov-Smirnov test. Demographic and clinical characteristics of the patients with and without DGF were compared by two-sample student’s t-test or Mann-Whitney test in quantitative variables and by chi-square test or Fisher exact tests in qualitative variables. The association between biomarkers and DGF was evaluated in a multivariate logistic analysis while adjusting the variables selected by univariate analysis and risk factors for DGF. Pearson’s correlation coefficients evaluated the correlation between NGAL and other variables. A receiver-operating characteristic (ROC) curve was used to determine the cutoff point for serum NGAL and creatinine level to predict DGF. The statistical analysis was conducted with SPSS version 21.0 (SPSS Inc., IMB Corporation, and Chicago, Illinois, USA). A  P-value<0.05 (two-tailed) was defined as statistically significant for all analyses. Confidence intervals (CI) were calculated on a 95% level.

Table 1. Demographic and clinical characteristics of recipients and donors in DGF and non-DGF groups

Table 2. Biomarker outcomes in patients according to DGF and non-DGF groups following transplantation

Prediction of DGF by serum NGAL

Table 3. The area under the receiver-operating curves for DGF prediction A meta-analysis study indicated that rine and serum/plasma NGAL was valuable biomarkers for early identification of Delayed graft function (DGF) in renal transplantation, and blood NGAL was superior to urine NGAL in the early prediction of DGF (26). Moreover, measuring urine NGAL during the first 6 hours after admission or surgery with a cutoff point of 50 mg/dL provides the optimum diagnostic value in detecting AKI in children (27). In 2009, Michael Haase and colleagues showed that the NGAL level was a useful prognostic tool for the prediction of renal replacement therapy initiation and in-hospital mortality (28, 29).

The accuracy and predictive power of serum Cr was affected by many parameters such as age, sex and muscle mass, protein metabolism, volume of distribution, and drugs (30). Furthermore, the ability of creatinine to detect functional impairment is less than 50% (31). Several studies have evaluated the role of urine or serum NGAL in predicting DGF after kidney transplantation, compared with traditional biomarkers such as serum Cr and urine output (32,34). Similar to our study, they showed that NGAL level was more helpful than serum Cr in early predicting DGF. In contrast, Mahdavi-Mazdeh et al., (35) reported ROC curve and AUCs of serum NGAL and serum Cr levels on the first post-transplantation day had similar significance in predicting DGF. However, they showed that the highest AUC (0.82) was attributed to serum NGAL at 24 hours (P-value=0.002). Parikh et al., (33) in 53 transplant patients from living and deceased donors, found a better AUC (0.9) for urine NGAL in the prediction of DGF than serum Cr. While Mojtahedzadeh et al. (36) in 69 transplant patients from deceased donors found a relative fall in serum Cr had higher AUC (0.821 vs. 0.790) than urine NGAL at 24 hours post-transplantation in the prediction of DGF. In contrast to our findings, some of the previous studies showed that NGAL level in early postoperative hours was not able to differentiate patients with DGF from those with non-DGF (35, 36). Lebkowska et al., (37) found a significant decrease in serum NGAL as early as 24 hours after transplantation before the serum Cr level decreases. Two studies demonstrated that 48 hours urine NGAL showed larger AUCs and better sensitivity and specificity than those of early hours after transplantation (38, 39).

NGAL is a good predictor of early AKI post OLT, although there is significant variation in the published results. Standardized definitions of AKI and rigorous data reporting should be shown to establish its clinical usefulness and limitations (40, 41). A systematic review and meta-analysis found that urine levels of IL18 and NGAL from patients with cirrhosis discriminate between those with ATN and other types of kidney impairments, so these biomarkers might be used to determine prognosis and select treatments for patients with cirrhosis (42, 43). Plasma and urine NGAL were evaluated and compared in some studies to investigate their performance to predict DGF (31, 32, 44). In some studies, plasma NGAL showed higher sensitivity and slightly higher specificity than those of urine NGAL, which supported the superiority of plasma NGAL over urine NGAL in predicting DGF within 24 hours following kidney transplantation (44). Hollmen et al., (31) found a higher AUC value of serum NGAL (AUC, 0.85) compared to urine NGAL (AUC, 0.74). However, Maier et al., (32) reported higher AUC (0.74) of urine NGAL compared to serum NGAL (0.73) at 24 hours post-transplantation to predict DGF. These contradictory findings may be due to differences in study designs or sample size. Therefore, a large prospective kidney transplantation cohort with different sampling time points is required to illustrate the features of NGAL in predicting the risk of DGF.

The small sample size is the main limitation of this study, so further studies in larger cohorts are necessary to confirm our results. The small sample size also limited our ability to evaluate meaningfully between different variables and examine important patient subgroups. Also, due to the low sample size, a multivariate analysis of the combination of the two biomarkers was not possible. Another limitation of this study was the unavailability of cold ischemia time.

In conclusion, the study showed that the superior serum NGAL to serum Cr is an early predictor of graft function and DGF. Serum NGAL at the early hours after transplantation also demonstrates excellent potential for predicting DGF with fair sensitivity and specificity. While measuring serum Cr at 24 hours, post-transplantation did not help diagnose DGF. Our findings emphasize the promising role that NGAL serum can play as an early indicator of DGF.

Ethics statement
The study was approved by the Ethics Committee of Tehran University of Medical Sciences (Code: IR.TUMS.VCR.REC.1397.173) and the patients were enrolled after giving written informed consent.