Introduction: This research was conducted to assess whether prophylactic citrate potassium can reduce double-J stent encrustation in patients with urolithiasis.
Methods: In the present study, 70 patients with urolithiasis were randomly assigned to two groups of control [22 men; mean age 43 (33-55)] and intervention [25 men; mean age, 41 (37-56)] after meeting inclusion criteria. Potassium citrate (10 mEq Alithoral tablet) was administered three times a day from double-J stent insertion until removal in the intervention group. For the control group, no treatment was given. It was examined after removing the stent, and laboratory tests were performed in encrustation. Moreover, blood and urine were collected for assessing creatinine, crystalluria, and pyuria. Information concerning the duration of double-J stent placement, the composition of urinary stone (calcium oxalate or other), number of attack episodes, type of double-J stent (one way or other), and smoking habit were collected.
Results: Three control group participants were excluded from the study due to missing follow-up. Patients of the two groups were matched for age, sex, duration of the double-J stent placement, and the number of attack episodes. There were significant differences regarding crystalluria and creatinine dosage between the two groups. Furthermore, double-J stent encrustation occurred in 3 (8.8%) and 11 (34.4%) patients of the intervention and control group, respectively, which showed a significant difference (P-value=0.012). Comparison between intervention and control group revealed an odds ratio of 18% (P-value=0.017) and 15% (P-value=0.023) in the crude and adjusted model, respectively.
Conclusion: Potassium citrate can significantly reduce double-J stent encrustation in patients with urolithiasis. Therefore, it is recommended that urologists consider citrate potassium as a preventive treatment for encrustation. 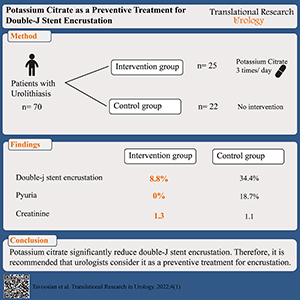 Nowadays, ureteral stents have become inseparable from urologists' routine practices (1). The ureteral stent has been employed as adjuvant therapy in the treatment of renal stones and urinary obstruction, identification of ureter during surgery, and handling urinary leakage  (2). Although a broad spectrum of ureteral stents is used in urological settings, they may be associated with various complications, including, but not limited to, stent discomfort, infection, encrustation, and stone formation (2, 3).

Stent encrustation over Double J (DJ) stent is a prevalent complication of ureteral stenting  (2, 4). The incidence of encrustation has a positive association with the DJ stent indwelling time (5). Stent encrustation can cause urinary infection (6), reconstruction (7), and even renal failure (8); therefore, it has the potential to be detrimental to patients' health (9, 10).

The applicability of potassium nitrate to reduce urolithiasis recurrence has been investigated in several studies, and virtually all of them have emphasized a significant reduction in renal stones through this approach (11-13). Moreover, high clearance rates of stones can be expected using potassium citrate through several mechanisms, including modulating the concentrations of urine electrolytes and saturation of calcium oxalate (14). Encrustation and resultant urine stones are common following stent insertion. Because potassium citrate is of proven value in reducing the rate of renal stones formation, we designed a randomized clinical trial to assess whether potassium citrate can decrease stent encrustation in patients with ureteral stents.

A total of 70 patients with ureteral stones were enrolled and underwent transurethral lithotripsy at the Urology Department of Sina Hospital during 2020. The study was under the Tehran University of Medical Sciences Ethical Committee after receiving the Iranian Randomized Clinical Trial code (IRCT20190624043991N8). Patients enter the study after signing the written informed consent. All the enrolled patients were indicated for transurethral lithotripsy and randomized to two groups. The exclusion criteria for our study were as follows: 1. Any metabolic abnormality; 2. Digoxin use; 3. History of hyperkalemia; 4. Pregnancy; 5. Calcium supplements usage; 6. Potassium-sparing diuretics; 7. Levodopa prescription; 8. Serum potassium higher than five mmol/l; 9. Glomerular filtration rate lower than 70 ml/min; 10. Patients treated with citrate potassium for any reason.

After confirming the inclusion and exclusion criteria, we explained to the patients that their information would only be used to conduct a research project approved by the ethics committee of Tehran University of Medical Sciences, and their written and informed consent was obtained for this purpose. After transurethral lithotripsy, the patients were randomly divided into intervention (n=35) and control group (n=35) using permuted balanced block randomization method (blocks of 4). The intervention group consisted of those who received double-J stents plus ten mEq Alithoral tablets (potassium citrate) three times a day from insertion until double-J removal (Figure 1). The control group included patients receiving only double-J stents with no potassium citrate. Moreover, we recommended that all the patients continue their routine eating habits, reduce sodium and foods rich in oxalate, consume at least two liters of water per day, and have regular calcium intake. To keep the urine pH in the intervention group between 6.8 and 7.2, we measured it every two weeks. The dosage of Alithoral increased to 40 mEq per day if urine pH was lower than 6.8, and if it was higher than 7.2, we decreased the dose of Alithoral to 20 mEq. Figure 1. Flow diagram of the progress through the phases of a parallel randomized trial of the two target groups.

Moreover, we controlled patients' electrolytes in the intervention group every two weeks to prevent hyperkalemia. All patients were evaluated visually for the formation of stones and crusts on double-J stent at the time of double-J stent removal. Also, double-J stents were sent to the laboratory to assess stones and crust formation. For patients with encrustation, the composition of double-J stent encrustation was analyzed. Moreover, blood and urine samples were taken to evaluate crystalluria, creatinine, and pyuria. Patients' demographic information, including age, gender, smoking habits, recurrent formation of urinary stones, the stone composition (calcium oxalate), and type of double-J (one-way or two-way), were recorded. We also compared the patients of both groups for easy removal of the DJ stent, which was defined as DJ stent extraction without any resistance.

Continuous variables were reported using the median (interquartile range) and the discrete ones (percent). Moreover, to compare these two types of variables between intervention and control groups, nonparametric tests of comparing medians and Chi-squared test were used, respectively. Because a binary variable is designated as the response variable, logistic regression was used to assess the impact of covariates on this dependent variable, and then the odds ratios (ORs) produced by this model and reported in the results.

The mechanisms behind the decrease in odds of stone recurrence have been virtually illustrated. The strong binding between calcium ions and citrate leads to soluble complexes, thereby decreasing the supersaturation of calcium salts in urine (14, 15). Moreover, it is essential to note that urinary secretion or citrate reabsorption depends on the body's acid-base status. To modulate extra levels of acid in the blood, an increase in reabsorption of citrate from proximal renal tubule will occur, and in contrast, the decrease in the reabsorption of citrate will be expected in alkalosis; therefore, citrate concentration will be increased when using potassium citrate, but the likelihood of stone formation will decrease (16, 17).

Encrustation has remained one of the main stent complications causing quite a few troubles for the urologist. Crystallization of urine salts is the primary pathophysiology of encrustation following catheter or stent insertion (20, 21). It has been demonstrated that there are various risk factors for encrustation, including long duration of the indwelling stent, urinary sepsis, chemotherapy, pregnancy, chronic kidney failure, and history of urolithiasis (22, 23). Our patients were matched for the duration of double-J placement and history of urolithiasis and were negative for other risk factors.

The main limitation of our study is that urine citrate, potassium, and other components were not measured before and after the treatment to assess their changes during the treatment.

Ethics statement
The study was under the Tehran University of Medical Sciences after receiving the Iranian Randomized  Clinical Trial code (IRCT20190624043991N8). Patients enter the study after signing the written informed consent.