Introduction: This study aimed to evaluate how silver nanoparticles, in conjunction with black seed and honey, affected alterations in serum, urine, and renal variables in male mice with renal stones.
Methods: Our study considered four target groups: negative and healthy control groups, 125ppm silver nanoparticles treatment, 125mg/kg black seed with 125mg/kg honey, and 125ppm silver nanoparticles treatment. We introduced essential ingredients to the groups from the first to the last day of the experiment, adding 1% ethylene glycol to the drinking water. The researchers investigated serum variables, such as potassium, sodium, calcium, phosphorus, and magnesium, urine factors like citrate, oxalate, and calcium, and tissue factors like kidney weight and crystal count.
Results: The results of this paper revealed that the accumulation of calcium oxalate crystals in the treatment group with 125ppm of silver nanoparticles significantly increased compared to other groups (P-value<0.001). Biochemical examination of urine showed that urine oxalate in the group treated with 125ppm of silver nanoparticles increased by (0.03±0.78) and in the combined group of honey and black seeds (125mg/kg) and silver nanoparticles (125ppm) increased by (0.05±0.54). It shows significance (P-value 0.001). In addition, the results of changes in serum and tissue parameters in both groups showed that they aggravate the formation of kidney stones.
Conclusions: According to the findings of this research, silver nanoparticles cause toxicity in serum, urinary, and kidney tissue factors. Therefore, they are not a suitable option for preventing and treating kidney stone patients. 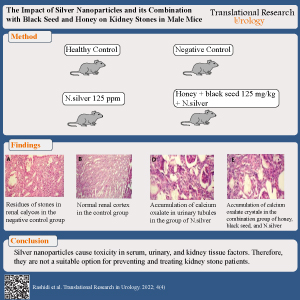 The animal house at Shahrekord Azad University provided 45 male mice weighing 25-30g. The Islamic Azad University Ethical committee approved the study (IR.IAU.NAJAFABAD.REC.1397.075). All rats were housed in ideal temperature and humidity conditions at Shahrekord Azad University's animal nest. Animals have full access to water and food throughout this period. We gave drinking water containing 1% ethylene glycol to 8 groups of mice throughout this time. Sawdust was put on the cage floors, and the cages were cleaned twice a week to prevent mice from becoming unwell and maintain proper hygiene.

The animals were regarded as 4 experimental groups, with 5 mice in every group. These groups are:

Healthy control group (1): 1% of distilled water was added to the drinking water of this group during the experiment.

Negative control group (2): We added 1% ethylene glycol to the drinking water of the mice group during 30 days of treatment.

Sigma provided spherical nanoparticles with a normal diameter of 10nm and a storage solution concentration of 1000ppm. Citrate reduction was used to make silver nanoparticles chemically. The required dilutions were then generated using the dilution series approach from the primary storage solution. The mice were dissected, collected for pathological examination, weighed, and stored in 10% formalin. Hematoxylin and eosin staining were performed on the collected samples at a pathology facility.

In the biochemical analysis phase, SPSS software was used to assess the result statistically (8), one-way variance analysis (ANOVA), and Tukey post hoc tests. The data is provided as Mean Standard Error Mean in all cases. The results were significantly considered as (*** P-value<0.001), (** P-value<0.01), and (* P-value<0.05).

Results of determination of Serum parameters in mice

Table 1. Tukey test results to compare the mean Results of determination of Serum parameters in mice of the negative control group with other groups.

Table 2. Tukey test results to compare the mean urinary parametersin of the negative control group with other groups

Results of determining the weight of all mice

Table 3. Tukey test results to compare the mean Kidney weight of the negative control group with other groups

Determining the number of crystals in mice

Negative control group). In this group, the cortical region is not regular, and the capsular space in the renal bodies is much wider than in the control group. In the medullary regions, we observed clear pathological changes so that the central spaces of the tubules are filled. This finding results from forming oxalate crystals that fill most of the central space of all tubules. In this group, The equivalent of 40.7±1.29 crystal units in 10 fields was randomly counted in this group. The changes in the pathology of this group are quite obvious in the form of filling the central spaces of the tubules (Figure 1).

Control group) In this group, the cortex area, which contains renal bodies (glomerular network and Bowman's capsule) and Pct and Dct tubules, is normal. The medulla area is also usual in this group, and no detrimental influence is observed in the tissue. No traces of calcium oxalate crystals were seen in every slice. In the group (125ppm silver nanoparticles), extensive tissue destruction was observed in the cortex and medulla. Calcium oxalate crystals are abundantly deposited in the urinary tract of these two areas, which are large but slightly smaller than the control group. The renal bodies have been destroyed and lost their order after treatment with silver nanoparticles. Pct and Dct tubules showed fewer changes than renal bodies. We randomly counted the equivalent of 35.5±1.56 crystal units in 10 fields in this group. The combined group of silver nanoparticles, honey, and black seed) due to the association of honey and black seed with silver nanoparticles, the changes in pathology observed in this group were less than in the group of silver nanoparticles alone. The tubules have an almost normal appearance, and no significant pathological changes were observed in the medulla oblongata. Calcium oxalate crystals were mainly present in the bodies. The equivalent of 12.6±1.41 crystal units in 10 fields was randomly counted.

The results showed that in the 125ppm group, silver nanoparticles of 35.5±1.96 crystals were observed, which had the highest number of crystals in this group compared to the other groups.

In addition, silver nanoparticles had no effect in lowering urinary calcium or preventing the production of kidney stones. In the study, the kidney weight in the negative control group (0.67±0.01g) was very close to that in the group treated with silver nanoparticles (0.65± 0.005g). The number of crystals in the group treated with silver nanoparticles (35.5±1.96) was higher than in the other composite groups. Combining silver nanoparticles with pumpkin hydroethanolic extract on wound healing in mice indicated the cumulative effect. The combined impact of these two compounds is more than each, which shows that the designed nanocomposite has synergistic restorative effects. In this study, silver nanoparticles with an average of 10 nm with concentrations of 250, 125, and 500 ppm and hydroethanolic pumpkin extract with concentrations of 70%, 50%, and 25% / kg and a combined concentration of silver nanoparticles of 125 ppm and extract / kg/mg was 25% (10). The impact of silver nanoparticles on serum phosphofructokinase enzyme and skeletal muscle tissue structure in male Wistar rats was examined in this study. The results demonstrated that silver nanoparticle concentrations of 50, 100, 200, and 400 ppm had no effect on the activity of this enzyme. The 400 ppm silver nanoparticles reduced skeletal muscle tissue order and tore some myofibrils with comparison to the control group (11). Susan et al., demonstrated that the distribution of nanoparticles in bodily tissues and their effects alter as their diameter and concentration change. Another study found that histopathological alterations linked to kidney dysfunction caused by nanoparticles' direct influence on cells, such as the creation of reactive oxygen species (ROS), are essential in the emergence of structural and functional abnormalities in the kidneys of male albino rats (12). The use of black seed aids in the reduction of this urine component. In the negative control group, the level of calcium oxalate in the black seed treatment group dropped. Numerous studies have examined the impact of several medicinal herbs on preventing kidney stones. Honey can also help in the treatment of kidney and urinary tract problems. Because it has no salt and just a little amount of protein, it is a good therapy for renal pain (13).

This study observed significant changes in serum sodium and potassium levels. This result is similar to the study conducted by Oberdo and Lam. Some studies report that silver and silver salts can be distributed throughout the body and accumulate in the liver and kidney. Studies show that silver makes the cell membrane more permeable to sodium and potassium and disrupts the activity of the sodium-potassium ATPase pump and mitochondria, and changes sodium and potassium levels in blood serum (15). Compared to the negative control group, the average serum sodium level in the combined group of honey and black seed (125mg/kg) and silver nanoparticles decreased by 125ppm In the present study. The average serum level of potassium in the group treated with the concentration of 125 ppm of silver nanoparticles was the highest (5.7±0.16mg/dl) compared to the negative control group. The results of this research are consistent with the studies mentioned earlier, and nanoparticles cause disturbances in pumped activity and increased potassium retention inside the cell, and changes in sodium and potassium levels were observed.

Kim et al., reported that when silver nanoparticles enter the body through ingestion, inhalation, or skin, they are transported into the bloodstream and accumulate in some organs (16). Silver nanoparticles cause DNA damage in mammalian cells through oxidative stress-related mechanisms and significantly increase cell death (17).

The present study observed the toxic effect of silver nanoparticle solution with a concentration of 125 ppm and black seed and honey (125mg/kg) on serum and urinary. Kidney tissue parameters, and in short, it can be concluded that silver nanoparticles directly affect the normal activation process of body cells and cause disruption in the functioning of body organs. Therefore, silver nanoparticles can not be recommended for treating kidney stones because the results achieved in the single state and combined with honey and black seed were to change the factors to intensify the state of stone formation.

The authors declare no conflicts of interest.

The present study was run under the Ethics Committee of Islamic Azad University (IR.IAU.NAJAFABAD.REC.1397.075).