Introduction: Urinary tract infection (UTI) is a common bacterial infection and usually requires antibiotics for treatment. But the antibiotic resistance is always a serious concern. So, developing some alternative medication strategies such as herbal medicine is an extreme need. Several studies have confirmed the prophylactic and also therapeutic effects of a variety of anthocyanin-containing berries for UTIs. Cornus mas which is native to Southern Europe and Southwestern Asia is also rich in anthocyanin but its effect on UTI has been not yet studied. This study aims to evaluate the effect of Cornu's mas extract in treating UTI in rat models.
Methods: After inducing UTI in 18 Wistar rats, they were sub-grouped into three groups: control group, nitrofurantoin treated group (case I) and Cornus mas treated group (case II). After seven days of treatment, the UTI indicators like fever, microscopic analysis of urine, and pathological examination of the bladder were investigated.
Results: Actually, UTI indicators were resolved after treatment in both treated groups (nitrofurantoin and case II). Comparison of the results between the control group and the other three groups confirmed the development of UTI in the rat model. Clinical, laboratory, and pathologic results proposed that the Cornus mas extract effects in treating UTI are not inferior to that of nitrofurantoin.
Conclusion: In addition to its anti-inflammatory effects, Cornu's mas extract can be a gifted potential substitute for antibiotics in treating UTI in rat models. 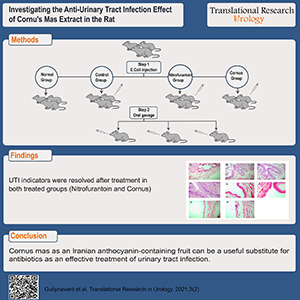 Urinary tract infections (UTIs)  are common bacterial infections (1). Escherichia coli (E.coli) is the most common uropathogenic (80%) isolated in acute urinary tract infections (2). Some risk factors increase the risk of  UTI and interstitial cystitides like kidney stones and urogenital malignancies (3-5). Several antibiotics such as nitrofurantoin, trimethoprim-sulfamethoxazole, and fluoroquinolones are considered for the treatment of UTI (3, 6). There are some complications like E. coli resistance to the antibiotic that can consequence in chronic untreated cystitis.  It can be considered especially for trimethoprim  (alone and in combination with sulfamethoxazole)  and fluoroquinolones with resistance rates of  15–45%  and  10–20%, respectively (7). So there is an extreme interest to find a suitable herbal medicine component that can take the place of antibiotics in UTI treatment (8). Several studies indicated that some berries such as cranberry, contain anthocyanins, as an effective anti-cystitis component,  so can treat UTI (9-11). Cornus mas or cornelian cherry is a bear edible fruit that is native to Southern Europe and Southwestern Asia. In Iran, Cornus mas grows in Arasbaran (East Azerbaijan, Iran) and its antioxidant capacity, total anthocyanins, total phenols, ascorbic acid, and total flavonoids of several selected cornelian cherry genotypes have been investigated (12).  It is shown that anthocyanins present in Cornus mas, are delphinidin 3-O-β-galactopyranoside (I), cyanidin 3-O-β-galactopyranoside (II), and pelargonidin 3-O-β-galactopyranoside (III) (13-15). Several studies showed the benefits of anthocyanins as the main component of Cornus mas in the treatment of several conditions like cardiovascular diseases, atherosclerosis, inflammation, and cancers (16-19).  Despite several reported efficacies for berries family in UTI, the potential effects of Cornus mas in treating UTI have not been studied yet. In the present study, we investigated the role of Cornu's mas extract in the treatment of bacterial cystitis in rat models.

All experimental procedures were performed following institutional guidelines for animal studies of Tehran University of Medical Sciences and the protocol was approved by the Tehran University of Medical Sciences ethical committee (IR.TUMS.SINA HOSPITAL.REC.1399.021(. Female Wistar rats (150–300 g) were individually housed and maintained under an inverted 12-h light/dark cycle (lights on at 17:00 h), the temperature of 22 ± 2°C, and humidity of 22%. Water and standard rodent diet were provided ad libitum. The present study was designed to use the minimum number of the rat. In this study, 24 Wistar rats that were infected by E. coli were allocated into the four groups based on the intervention: control (infected with E. coli), normal, treated with an antibiotic (case I), and treated with Cornu's mas extract (case II). Wistar rats were kept in 4 cages in 6 columns. All the rats were female at 3 to 4 weeks of age. All rats were housed in plastic cages sized 32 × 19 × 17 cm3 and maintained in a controlled environment for five days before any intervention. Initially, all four groups were stained yellow for ease of detection. The control group was identified by their yellow waist; the normal group was identified by their yellow abdomen; group 3 was identified by their yellow hands; group 4 was identified by their yellow feet. One mouse from each group was sacrificed by carbon dioxide (CO2) and was sent for microscopic analysis of urine and pathologic examination of the bladder wall. Two days before the treatment initiation, 0/1 ml Ketamine 5% was injected intraperitoneally with an insulin needle (Needle size: E. coli (0.5 McFarland) was injected through the urethra with a gavage syringe to catch cystitis. The antibiogram was performed to confirm the sensitivity of E. coli to nitrofurantoin and to determine the concentration of nitrofurantoin. To confirm the presence of cystitis, after 24 hours one mouse from each group was randomly chosen and immediately sacrificed by carbon dioxide (CO2). Rat’s bladder tissues were sent to the pathology department for examination. A urine test was performed to confirm the urinary tract infection.

Fever, stool loosening, hematuria, and urine color change were observed as the cystitis indicator. One of the most common observations after E. coli infection was hair loss in rats. To compare the effect of Cornu's mas extract with nitrofurantoin in the treatment of bacterial cystitis, after infection confirmation, treatment was started by gavage of the nitrofurantoin and Cornus mas for the two target groups for 7 days (Figure 1).

Figure 1. Both Cornus mas and Nitrofurantoin were gavaged (A), and mixed for daily consumption through their drinking water (B).

For the case, I group, half of the nitrofurantoin (500mg) tablet was dissolved in 15 ml distilled water and about 500 microliters (@8.5mg/kg) gavage once a day into the pharynx of rats. In addition, one and a half pills were dissolved daily in the rat's water flask for daily consumption through drinking water.

For the case, II group, 15ml of Cornus mas extract dissolved in 500cc water and 500 microliters of it were gavage into the rat's pharynx every day (once a day). Additionally, 15mg of Cornus mas with 500 ml water were mixed for daily consumption through their drinking water.

The same procedure was done for the control group but just with normal slain.

Our findings showed that after the injection of E. coli cystitis successfully developed in the rat.  Microscopic analysis of urine, microbial E. coli test, and pathologic examination all confirmed that target rats in three target groups are infected correctly (Figure 2).  All infected rats experienced hematuria, fever, stool loosening, urine color change to light pink, and opaque urine that were all considered as cystitis indicators. 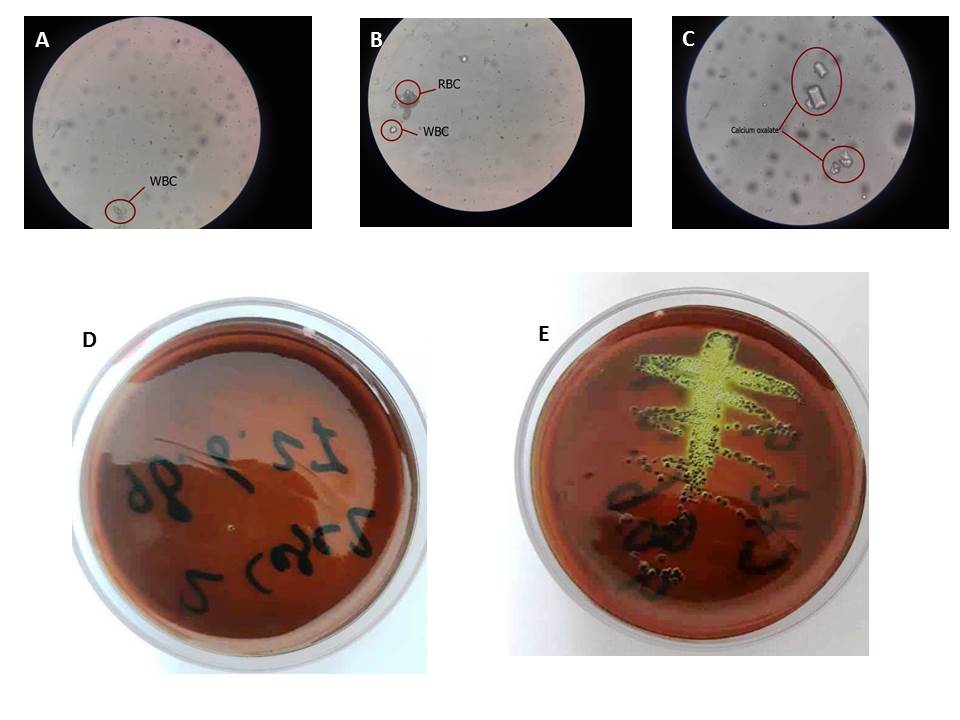 The body temperature of all rats was measured by thermometer under the mouse arm for 3 minutes and charted before and after infection and also during seven days of treatment (Tables 1 – 4).

Table 1. Several temperatures of the normal group (with no intervention and no infection) over seven days

Table 4. Several temperatures of the control group (infected with E.coli with no treatment) over seven days

Table 5.  Means of temperature in all groups over seven days

Figure 3. The temperature change of all four groups over seven days.

The therapeutic effect of Cornus mas on bacterial cystitis was also confirmed pathologically.

For Coronus mas treated group, reports were suggestive of mild edema and mild epithelial reactive changes but no significant inflammation was detected.

For the nitrofurantoin treated group, results showed mild edema and mild epithelial reactive change but no significant inflammation was reported. 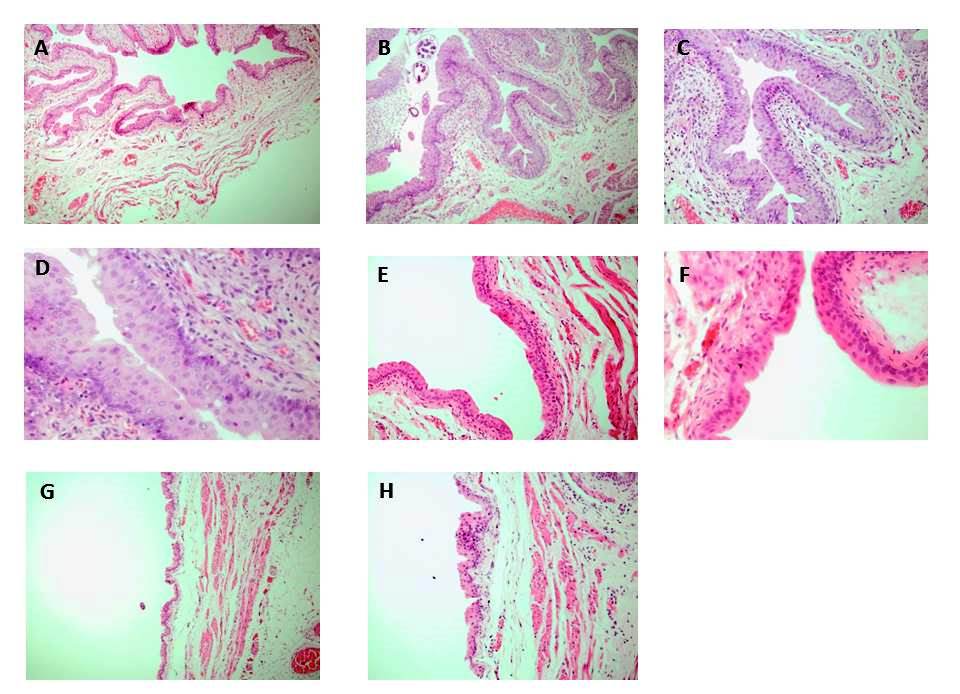 According to the results of the pathology examination, it can be claimed that treatment with Cornus mas has a non-inferior efficacy in treating bacterial cystitis in comparison to that of nitrofurantoin.

Antimicrobial resistance has remained one of the most important challenges in treating UTI, so developing alternative drugs is an extreme need. Herbal medicine can potentially propose important medication for uncomplicated recurrent UTI with both prophylactic and therapeutic effects (20). Several indications for the Anti-inflammatory and antimicrobial effects of anthocyanin extracted from berries have been suggested (10). RG Jepson, et al, in 2007 represent some beneficial effects of cranberries and blueberries in UTI prevention through a  systematic review study (21). They showed that symptomatic UTIs over 12 months, particularly in women with recurrent UTIs can be treated with cranberry.  Based on the EAU guidelines on urological infections 2019 cranberry is suggested in the prevention of recurrent UTI  (22). Limited studies have suggested that cranberry is useful in reducing the rate of lower UTIs in women (23, 24). However, a meta-analysis including 24 studies and comprising 4,473 participants showed that current cranberry products did not significantly reduce the occurrence of symptomatic UTI for women with recurrent UTIs (25). Based on the EAU guidelines on urological infections 2019, daily consumption of cranberry is not recommended in the prevention of UTI  (22).

Cornus mas is an Iranian’s native plant containing anthocyanin, so its extract potentially has anti-infection properties. Our results confirmed the therapeutic efficacy of Cornus mas which is not inferior to nitrofurantoin. Similarly, in  2015  A Milenković-Anđelković and his colleagues showed the anthocyanin content and its bioactivity in cornelian cherry (Cornus mas) (23).

There are some recommendations over the anthocyanin including berries ingestion to decline the incidence of UTIs, predominantly in patients with recurrent urinary tract infections (26). It can decrease the administration of antibiotics as well, which could be beneficial since antibiotics can direct to the worldwide emergence of antibiotic-resistant microorganisms. The anthocyanin including berries metabolites might be organic acids such as hippuric acid which act as an antimicrobial via acidifying the urine (27, 28).  Our results showed the consumption of Cornus mas successfully decreased rat’s mean core temperature similar to the nitrofurantoin group. However, the rat core temperature in the cranberry group had started to decrease earlier. Our study results showed that the Cornus mas treated groups' mean temperature started to decrease on day 3 while the nitrofurantoin effects were revealed after 4 days. However, in both groups (case I and case II) the mean temperature returned to normal by 7th day.

Several studies on different animal models assessed the prophylactic effect of anthocyanin including berries. A study on the rat model of UTI reported that anthocyanin can decrease bacterial counts in the bladder however it cannot resolve the infection. They recommended cranberry might be useful as an adjuvant for antibiotic treatment (27).

Based on our results, pathology reports for the Cornus mas treated group were consistent with that of the antibiotic-treated group; in both significant decrease of inflammation in comparison to baseline and control group were seen. In traditional medicine, the Cornus mas is suggested for the treatment of diarrhea, inflammatory bowel disease, fever  (29).

However, in a study on Spinal cord injured dogs with UTI, the authors found no significant prophylactic effect for cranberry, which might be a result of insufficient cranberry extract dose in dog models (30).

Due to these controversies about the prophylactic and therapeutic effects of anthocyanin-rich fruit/extract, and also the necessity of preventing bacterial resistance, it is wise to conduct further well-designed RCTs.

Our findings indicated that Cornus mas as an Iranian anthocyanin-containing fruit can be a useful substitute for antibiotics as an effective treatment of urinary tract infection.

There was no founding.